Panama - Pope Francis in Panama2019: "I ask you to pray for this very beautiful and important event on the path of the Church" 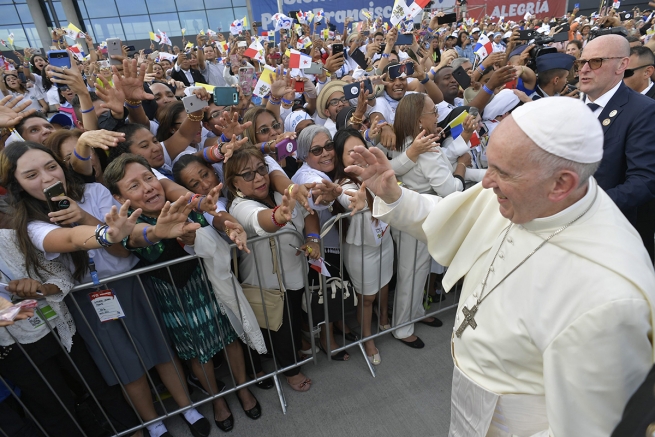 (ANS - Panama City) - Pope Francis landed yesterday, January 23rd, at 4:15 pm local time, at Tocumen Airport, Panama, after a journey lasting about 13 hours, on a plane that also carried a large delegation of journalists. On his arrival the Pope was received by the President of Panama, Juan Carlos Varela, and his wife; by the Apostolic Nuncio in Panama, mgr. Mirosław Adamczyk, and several other civil and ecclesial authorities.

Unlike what usually occurs, this time the Holy Father during the flight that brought him to Panama did not just say a few words of greetings, but spoke openly on various topics. Commenting with a journalist on the fact that the walls to stop migrants on the Mexican-US border reach right to the ocean, he said: "It's fear that makes us crazy." "I will go to Japan in November, get ready," he later added regarding future plans.

According to the news reported by "Vatican News", a journalist gave the Pope a drawing of a young migrant who died at sea and who had tied his report card to his clothes. The Pope was moved to hear this story and said that he will speak on the subject during the return journey.

Once he reached the airport, Pope Francis broke with protocol and approached the faithful waiting in line. At the age of 80, the Holy Father began the long and arduous program of WYD events. On his Twitter profile, he wrote: "I ask you to pray for this very beautiful and important event on the path of the Church."

At the WYD, the Successor of Peter will also give priority to the "existential peripheries": as when he will visit the juvenile prison of Pacora and the "House of the Good Samaritan", which hosts young people suffering from HIV.

Meanwhile, the organizers of WYD2019 have shared some data: participating are 480 bishops, 380 of whom offer catechesis to young people, in 137 centers, and in 25 different languages; 20,000 national volunteers and 2,445 foreign volunteers collaborate in the activities; the countries that gave the greatest contribution in terms of volunteers are: Colombia, Brazil, Costa Rica, Mexico and Poland; 2,500, finally, are the number of accredited journalists. And according to unofficial sources, GMG2022 may take place in Portugal.