Panama - Rector Major at Panama2019: "The SYM mustn't entertain young people for a few years. It's about experimenting donation and continuing to give our whole lifetime" 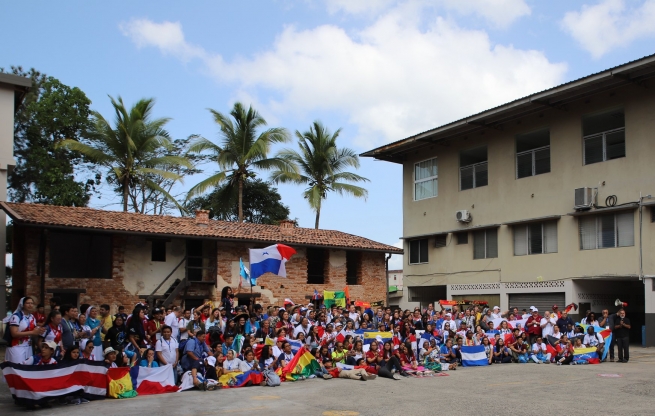 (ANS - Panama City) - Yesterday, Wednesday, January 23, the young people of the Salesian Youth Movement (SYM) experienced a day of extreme profundity what with his messages, a day rich in meetings and solid in prayer. Fr Ángel Fernández Artime, Rector Major, and Mother General of the Daughters of Mary Help of Christians, Mother Yvonne Reungoat, shared moments of reflection, celebration and prayer with young people from around the world.

"Do not be afraid of God" was one of the main messages that the Rector Major and Mother General FMA gave to the Youth Forum of the SYM, an event that was held yesterday morning in the Basilica Don Bosco of Panama. The forum, led by Fr Fabio Attard and Sr. Runita Borja, General Councilors for Youth Ministry of the two Congregations, gathered about 200 young SYM leaders from different countries worldwide to work on common global guidelines in working with young people.

During the meeting, a group of young people asked the two Superiors General questions. A young Angolan asked the Rector Major. "Could we better take care of the formation of lay people who collaborate with Salesians?"

Fr Artime's answer opened a panorama of reflection for all the young people of the world: "I believe it is the only possible path. Pope Francis warned that there is a danger in the Church, which is clericalism ... We must know that we all have different vocations, inspired by the Spirit. The Church of the future will have to be less clerical. The only way is to walk together, lay and consecrated, and the testimony will be richer, more credible, more attractive. The Gospel will be more visible. And it is true that we must take paths of formation; it is not enough with good will ... An option for the Gospel is not a question of two or three years ... I can imagine that in ten years you will be witnesses wherever you are. The SYM should not entertain young people for just a few years. It is about experiencing the donation and continuing to give our whole life."

The forum closed with the Eucharist presided by the Rector Major. Subsequently, in the afternoon, the great SYM party began, which first saw a dense program of songs, dances and activities for around 2,500 young people. Then, in the evening, the Vigil of Eucharistic Adoration began, presided over by Fr Attard. The party ended with the message of the "good night" offered by Fr Á.F. Artime and Mother Reungoat.

Videos of the Forum and SYM party  are available on Facebook.