Spain - "I need you, be many and be men of great virtue": Salesians Coadjutors 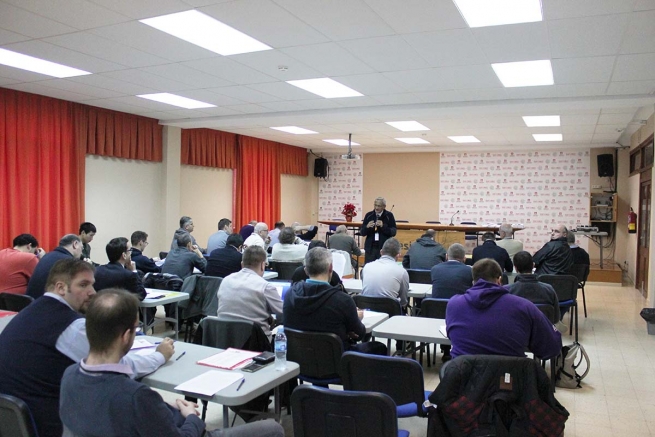 (ANS - Barcelona) - In the time of Don Bosco, founder of the Salesian Congregation, there were many people who helped the Italian priest in his tasks. People who came and went or even his own mother, Mamma Margarita, who gave a hand wherever it was needed. At that time the “suit” was indispensable for every religious, priest or lay person. Don Bosco instead ventured to integrate people in their “shirt-sleeves” into his nascent Salesian Congregation, without frocks or external signs. Thus was born the figure of the Salesian brother, a lay consecrated person, with religious vows and equally dedicated to the Salesian mission, but without being a priest.

From January 17 to 21, the Salesian House of Martí Codolar in Barcelona hosted the European Seminar dedicated to the deepening of the figure of the Salesian Coadjutor. 40 Salesian brothers from the two Salesian regions of Europe participated, accompanied by Fr Pascual Chávez, and they discussed aspects such as identity, mission, formation and specific characteristics of the coadjutor.

As Fr Chávez reported, it was Don Bosco himself who said, referring to the Salesian brothers: "I need you, be many and be men of great virtue." For the Piedmontese saint it was clear that there were many things that the priest could not do, "and that he was not obliged to do," observes Fr Chávez. In fact, it often happens that the priest finds himself doing things that take time away from what is important in the priestly ministry. Even if the Salesian priest, by vocation, is an educator, and therefore "it is inevitable that you meet him among children."

The difference, however, between the Salesian priest and the Salesian brother is that the latter lives his mission "from a lay perspective": he is a consecrated person who professes the three vows of obedience, poverty and chastity - without becoming a priest.

This was the personal choice of Jesús Julián García or Pep Alamán, two Salesian coadjutors present at the European Seminar. For Br García the difference, perhaps, is that "they bring Christ to the people and do not wait for the people to come to church to do it", even if, as Br Alamán said, "the charism is the same for everyone; the encounter with the living Christ is realized through the young and in particular those most in need."