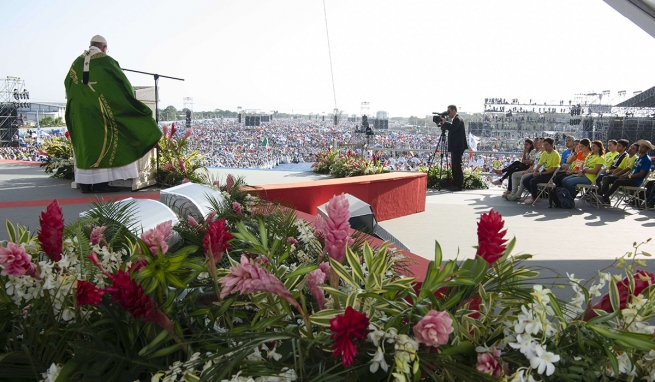 (ANS - Panama City) - The World Youth Day in Panama ended with the last greeting the Holy Father addressed to the approximately 700,000 young people present in the Campo St John Paul II - Metro Park. Each of his words becomes, from this moment on, a program of life for the young, for priests, for bishops, for the laity, for families.

"These were five days of great happiness," the Panamanian media wrote, "The event was named as one of the most memorable in the nation's history."

Thousands of pilgrims greeted the Holy Father at the international airport of Tocumen, on the afternoon of Sunday, January 27th, in addition to the President of the Republic, Juan Carlos Varela, and his wife, Lorena Castillo de Varela.

The Pope has thus embarked on his journey back to Rome, but his words and messages remain.

The day most awaited by young people was Saturday, January 26, when a true feast of the universal Church took place. "The appointment was at six in the afternoon, but as early as the morning hours the streets of Panama City were full of pilgrims eager to hear the message of Francis," wrote Zaida Navarrete, of the Salesian Bulletin of Central America. "The Salesians organized themselves in groups for the vigil. It was a sea of ​​flags, colorful t-shirts, vibrant drawings with the WYD logo and their favorite saints or the names of the groups they belonged to."

During the Vigil there were beautiful testimonies of life and then the expected message of Pope Francis. In his speech he spoke about Don Bosco. When they heard the words 'Don Bosco', "an explosion of emotions was born among the young. All the young people who attend Salesian works stood up, applauded and felt protagonists in the Pope's and the Church's speech in the name of their Holy Founder. In all this immense crowd there were no young people who were more proud than those of Salesian circles," continues Zaida Navarrete.

On Sunday 27 the Pope returned again. At 8 o'clock the Eucharist began. "You young are the now of God", was the strong message addressed to all the young people gathered, a breath of encouragement and hope that was percieved on everyone's face. There is no doubt that "no young person would remain the same on his or her return home."

The Pope concluded his stay in Panama by attending a meeting with the volunteers. He thanked them for their service, and then visited the "House of the Good Samaritan" reception center, which hosts young people with HIV. "The good Samaritan, like all your houses, shows us that our neighbor is first of all a person, someone with a concrete face," said the Pope to all those present.

His prayer did not forget the suffering peoples. "I wish to express my sorrow for the tragedies that have struck the State of Minas Gerais in Brazil and the State of Hidalgo in Mexico ... Here in Panama, I thought a lot about the Venezuelan people, the Philippines …," concluded the Holy Father.

At the end of the WYD in Panama, Portugal was announced as the next location of WYD 2022.