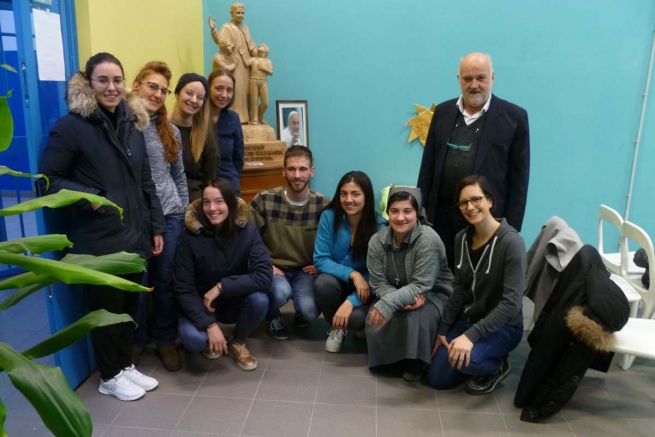 (ANS - Turin) - A group of about 40 university students from the Salesian University Institute of Venice (IUSVE), and the Salesian missionary animation groups in the Triveneto region, spent a few days of commitment and solidarity in the city of Don Bosco. The young people, accompanied by some teachers and educators, starting from a reflection on the Synod, retraced the footsteps of the Social Saints of the 19th century, and visited a number of emblematic sites of alienated youngsters at risk and their daily battle to combat difficulties and sense of alienation and distress.

The young protagonists of this initiative put themselves at the service of various Turin-based bodies active in the fight against marginalization: the Cottolengo Institute, the soup kitchens for the poor, the Turin center of the "Sermig" - Arsenal of Peace; the "Gruppo Abele", an NGO for 50 years alongside the last of Turin; the "Community of Sant'Egidio", the center of the Missionaries of Charity of Sant'Egidio ...

Among the different stages of their journey, made in the early days of the month, young people from Veneto also visited the city's juvenile prison, called "Ferrante Aporti". The meeting was preceded by an exchange of information on the reality of detention, and consisted of spending an afternoon of talks and friendship with the detainees.

"The Synod on the young," says Fr Domenico Ricca, Salesian, chaplain of the 'Ferrante Aporti', "in the intentions of Pope Francis had to involve all the juvenile realities, especially the most fragile: this is why it is very significant that a group of teenagers of our Christian communities have proposed to their animators their wish to know their peers who live the reality of detention."

"The Synod has offered the opportunity to make young people reflect on their vocational choices," adds Barbara Celia, the educator who guided the approach path to the prison, "and in our meetings we reflected on how the prison and the world of distress of these young people can be, in perspective, a choice of professional commitment or a field in which to engage as volunteers."

"Service and provocations. Service and reflection. Life with our voids and our fullness, fabrics and saints, poverty and drama": this was, in the words of Arianna Pigani, a young former student of IUSVE, the experience of solidarity lived in Turin.