Panama - "Sainthood is contagious". Rector Major on last day of triduum of preparation for feast of Don Bosco 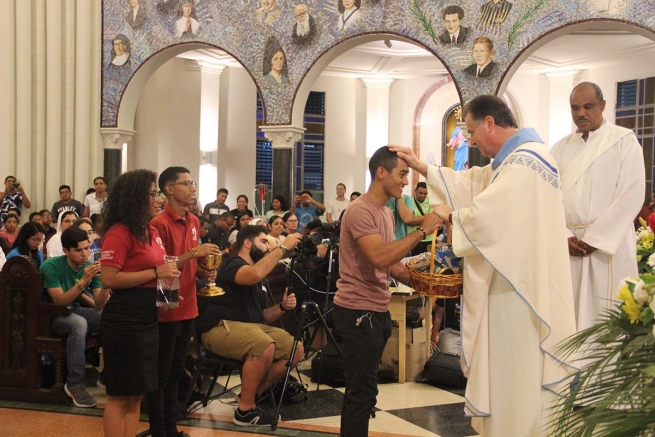 (ANS - Panama City) - During the Eucharistic celebration of Wednesday, January 30, in preparation for the feast of Don Bosco, the Rector Major, Fr Ángel Fernández Artime, emphasized that "the path of Christian life cannot be traveled alone, but in community."

The Rector Major began the celebration by thanking the faithful, the Salesians, the Salesian Family and above all the presence of diocesan priests and Msgr. Luis Antonio Secco, bishop of Curaçao in the Caribbean.

During the homily, Fr Á.F. Artime expressed his gratitude for the opportunity to be in Panama. "I thank the Lord for being able to celebrate this feast with the heart of Don Bosco, inspired by the Spirit. The theme of this day invites us to present the walk (along the path) of missionary holiness in daily life ... Today I want to place as the starting point of this holiness the Venerable Mother Margherita, the mother of Don Bosco ... Don Bosco said to his mother: 'I need you to come with me to take care of my boys' ... I think about what it meant for this woman to leave everything!," explains the Rector Major, "to go to Valdocco, take care of hundreds of children ... The life of Mamma Margarita is a testimony of anonymous, silent holiness."

To reinforce this community vision of holiness, the Rector Major recalled the "school of sainthood" that Don Bosco was able to form with a group of young people in a rather restricted physical space: a school wherein were formed the figures of holiness of the stature of Domenico Savio, Michele Rua, Luigi Versiglia, Callisto Caravario, Luigi Variara, Andra Beltrami.

What was Don Bosco's secret in stimulating the desire for holiness in these simple boys? First of all, precisely the simple sharing of life with two saints: Don Bosco himself and Mamma Margherita.

What ascetic proposal was offered them to awaken the desire for holiness? Nothing extraordinary. Yes, the channeling of those youthful energies in study, in sport, in joy, in the family atmosphere. And, of course, prayer. A festive and youthful prayer.

Don Bosco looked at those boys with the eyes of God. He believed in their potential. He encouraged them to give their best. He convinced them that God had a dream for each of them and that they should not be afraid of what God would ask each of them, because that would be the way of their happiness.