Panama - The Rector Major, together with the President of the Republic, visited the new project in Colón 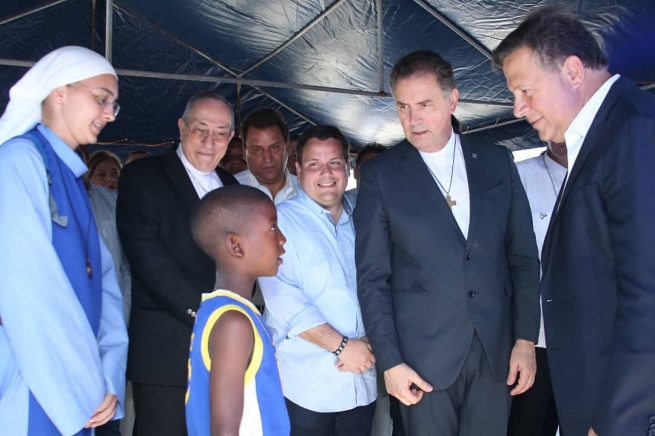 (ANS - Colón) - On 30 January Fr Ángel Fernández Artime, Rector Major of the Salesians, visited the project under construction of the Los Lagos Integrated Educational Center, located in the province of Colón, which the Government of Panama has entrusted to the Salesian Congregation.

During the visit, Fr Á.F. Artime was accompanied by the President of the Republic of Panama, Juan Carlos Varela; by Msgr. José Domingo Ulloa, archbishop of Panama; and the Minister for Housing, Martín Sucre Champsaur. Together they visited the residential project "Altos de Los Lagos", located in the province of Colón, and were able to see the progress of the work.

The President of Panama sustained that in consideration of the growth this project maintains, and the large number of children living in that area, it was necessary to provide this important educational center.

"The San Juan Bosco Integral Bilingual Formation Center of Los Lagos will be managed by a group of Salesians," explained President Varela, "to strengthen family and Christian values among the hundreds of children in Colón, for whom now begins a new phase of the residential project."

The Center was entrusted to the spiritual Sons of Don Bosco thanks to an agreement signed with the Ministry of Education in December 2018. In this way, the Government of Panama decided to focus on education and on the Preventive System of Don Bosco in favor of a population of about 1,500 children at risk living in that area.

For his part, Minister Sucre Champsaur added: "We are satisfied because there are new days awaiting a generation that is preparing to positively change the country ... The whole center in its entirety will be ready by 2020, but we have verified every possibility to start the new infrastructure, including some premises within the residential project 'Altos de Los Lagos', and thus begin to carry out a socio-educational work," said Sucre Champsaur.

The structure will be able to count on a number of buildings, which will host: administrative offices, kindergartens, primary and middle schools, as well as a gym, a bar, sports fields and an auditorium. In addition, eight halls have already been set up to welcome classrooms for nursery and kindergarten children from next March.

The occasion was also favorable for the delivery, by the State, of two apartments in the residential complex, which will constitute the residence of the religious who will lead the center.

Altos de Los Lagos is a residential complex recently inaugurated by the national government for the benefit of the poor, with decent housing and a healthy environment, far from the violence of the popular neighborhoods of the province of Colón in Panama.