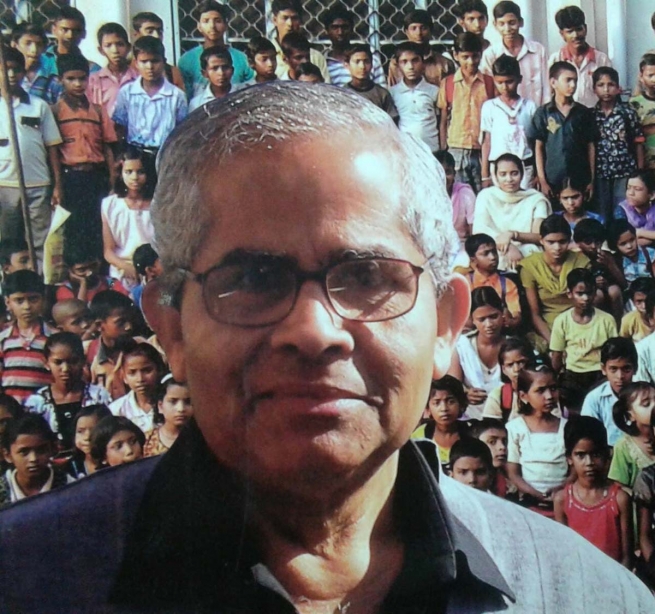 (ANS – Kolkata) – A Salesian brother, who was hailed as the “father of drop-outs,” for his pioneering works in non-formal vocation training in eastern India, died on February 1 in Kolkata. The funeral of Brother Mathew, aged 78, will be held at the historical Marian shrine of Bandel on Wednesday 6 February 2019.

Br Mathew was a well-known innovator and consultant, both among Government and Non-Government circles in India and abroad, for his unique and spectacular approach in training and creating job opportunities through non-formal technical education.

“Hailed as the 'father of drop outs' Br Mathew, while he was director of Don Bosco Technical School at Liluah, started a self-employment project to care for school drop-outs, the young people of the area who had a propensity to become anti-socials,” recalls one of his collaborators and Don Bosco Alumnus Subrata Ganguly.

“One man's vision and initiative has, over the years, successfully managed to bring hope to the lives of many marginalized young people who would otherwise have been left out of the social mainstream,” Mr Ganguly recalls.

Kolkata Salesian Provincial Fr Nirmol Gomes asserts, “I have no hesitation in saying that Br T.V. Mathew is a jewel in the crown of Salesian Brother Vocations in India and lodestar for the typically Salesian initiatives in the non-formal education for the poor and marginalized youth. At the NCERT ceremony that conferred on DBSERI the Best Vocational Training Institution Award 2012 in West Bengal, Brother Mathew was hailed as 'Father of Non-Formal Vocational Training in India.”

Fr Gomes adds, “A man of great vision and foresight, Brother Mathew has touched and transformed the lives of thousands of young people over 40 plus years, saving them from vagrancy and despair, and from falling prey to militancy, particularly from joining the Naxals in the Jungalmahal area.”

Br T.V. Mathew's connection to Kolkata goes back to 1957, when he came to study at Bandel, and started the then revolutionary concept of providing self-employment opportunity through non-formal vocational training.

In a previous interview DBSERI's founder-director Br Mathew recalled his efforts to fight youth unemployment with self-employment saying, “as more than 85 per cent of children drop out from schools, Don Bosco Society took up this noble program to equip school drop-out boys and girls with income generating skills leading to self-employment.”

The initiative, which started during the tenure of first Indian provincial of Calcutta province Fr Joseph Kezhakkekara in hired premises with 14 vagrant boys, was later shifted to the present permanent site, at Mirpara, in 1990 with over 17 trades. The first Salesians who joined Br Mathew in the early days were: Fr M.M. Joy, Br Andrew Jojo, Fr K. A. Thomas and others.

After running the programme for 12 years in a rented building near Don Bosco School, Liluah, Salesian Calcutta province found a property of 4 acres of land which consisted of two factories that were closed down, while the land was a jungle with dilapidated sheds.

The Don Bosco Self Employment Research Institute (DBSERI) shifted to the present location at Mirpara in 1990 to keep up with the growing numbers of students.

DBSERI Mirpara is about 1.5 km from Liluah railway station, just 10 minutes of train travel from Howrah, nestled in what are four acres of salvation for hundreds of school dropouts.

A long time Consultant to the Government of West Bengal in Vocational Training and Government of India for Self Employment, Br Mathew has also initiated non-traditional income generating trades to train women in setting up small enterprises and be financially independent.