Venezuela - Church calls for "peaceful and transparent transition, which leads to free and legitimate elections" and calls for the entry of "humanitarian aid" 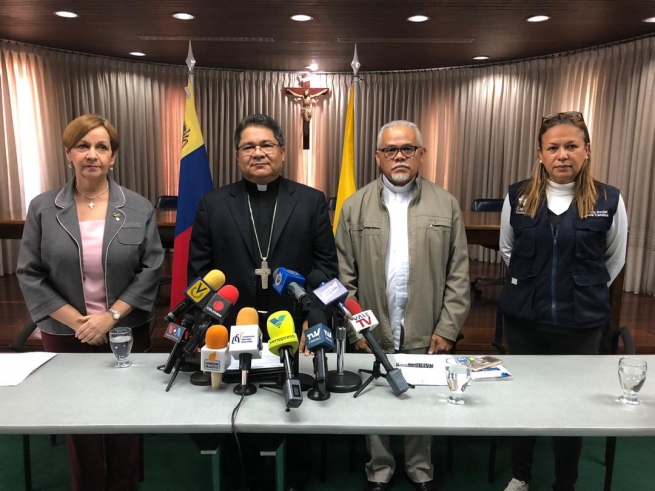 (ANS - Caracas) - A situation of "injustice and suffering", also marked by "a growing repression", which has generated "the search for political change through a process of peaceful and transparent transition". With these words the Church in Venezuela, through the representation of bishops, religious and laity, defines the recent events that took place in the Latin American country; and while it promises to maintain its own broad commitment to support the needy population, it invites all to pray for peace, reconciliation and freedom.

These considerations were presented yesterday, February 4, at a press conference in Caracas, during which the representatives of the three signatory bodies intervened: Msgr. José Trinidad Fernández, Auxiliary Bishop of Caracas, for the Venezuelan Episcopal Conference (CEV), Fr Francisco Méndez, Salesian Provincial of Venezuela, for the Conference of Religious (men and women) (CONVER); and María Elena Febres-Cordero Briceño, for the National Council of Laymen of Venezuela (CNL).

The statement said that "the Venezuelan people have re-awakened; they go into the streets because they strongly desire a change in the political and democratic direction of the country."

After listing the difficulties of civil life, the document recalls "the search for political change through a peaceful and transparent transition process, leading to free and legitimate elections, to resume the direction of democracy and to restore the rule of law." The transition path, it is explained, must however be conducted "in a peaceful way and through the instruments present in the Constitution, to avoid greater suffering and pains to the people."

The note then defines "the growing repression unacceptable" and with particular force demands the release of underage prisoners; expresses specific gratitude "to the activists who defend and promote human rights"; and invites all citizens "at this crucial moment in the history of the homeland, to give the best of themselves", to set upon the joint search for the "common good" and "avoid the shedding of blood."

The document also recalls that "the Catholic Church has been engaged for many years in accompanying and helping the most affected population", and promises to continue this effort.

Finally, the Venezuelan Church urges "to incentivize prayer and a spirituality incarnated in the situation that the people are suffering", especially through the Eucharist. In this regard, the invitation is to participate in the Mass on Sunday 10 February and to pray for peace, reconciliation and freedom.