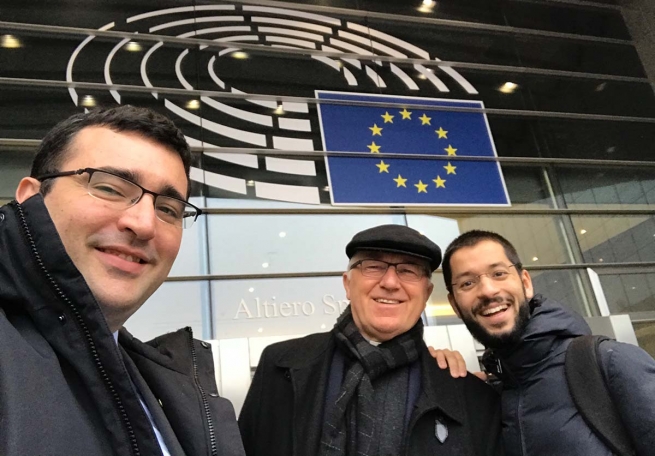 The institutional journey started very early on Wednesday 30, celebrating Mass at the European Parliament with the presence of 5 Members of European Parliament, from Italy, Croatia and Czech Republic and several public servants working in that institutions as well as embassy representatives from Italy and Poland. The Salesian crew managed as well to have some meaningful conversations on education, youth employment and the fight against poverty. Apart from searching new opportunities with some of them, they were gifted, as thanks for their support, with the book: “Turin, the city of Don Bosco”.

The second visit of the tour was at the Nunciature, where Mgr Alain Lebeaupin welcomed Fr Rozmus and shared some views and challenges for both the Church and the European Union: a fraternal dialogue thanking the positive contribution of the Don Bosco movement in Europe.

The third step of the day was once again in the European Parliament to share lunch with a group of Italian young people coming from INE Province (TGS Eurogroup) and Novara (ICP Province); and to get to know their experience visiting the heart of Europe. Following this family meeting, Fr Rozmus took part in the Holocaust remembrance in the plenary of the Parliament, where he met religious leaders from several confessions, among them Mgr Hollerich, President of COMECE.

The fourth milestone was at the EU Council, fully immersed in Brexit discussions; however the ambassador of Poland, H.E. Andrzej Sados, devoted thirty minutes to get to know the work of Don Bosco International, and open the door for future cooperation, to highlight the work of Salesians in Poland and in Europe.

The last event of the day was Don Bosco Mass and reception in the Chapel for Europe, where the Salesian crew could thank the partners in Brussels for the cooperation during 2018. Ten Salesians from both communities, Flemish and French-speaking, were present in the event, as well as other representatives of the Salesian Family, as well as a group of Salesian Syrian refugees living in Belgium (one even showed her Cooperator ID signed by Fr Egidio Viganò). A family moment, with a nearly full chapel, followed by a reception in which participants had meaningful conversations with several people.

On the 31st, the last point of the institutional agenda, was visiting COMECE to meet with Fr Olivier Poquillon op, with sharing on future activities and the thanksgiving for the very valuable cooperation with DBI and the many initiatives carried out together.

Later, Fr Rozmus reached the Belgium North Province to celebrate Don Bosco with them, and be present in both communities during his visit.

A very fruitful, intense and well-prepared marathon of meetings that, despite the fatigue of a long meeting day, allowed DBI to increase its impact and Fr Rozmus to get to reinforce his view of the importance of DBI’s work for the provinces of his Region.