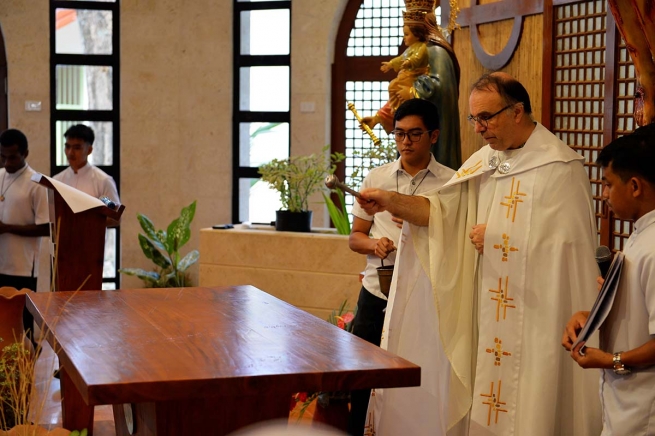 (ANS – Cebu) – To assist the Rector Major in his task of animating and governing the Congregation worldwide, the members of the General Council may carry out on his behalf Extraordinary Visits, lasting several weeks or months, wherein they have the opportunity to learn about Salesians and centers of a specific Province or Vice Province in-depth. A few days ago, the Councilor for the East Asia-Oceania Region, Fr Václav Klement, embarked on his in the Philippines South - Pakistan Province.

The FIS (Philippines South - Pakistan) Province Extraordinary Visitation commenced on 21 January with the arrival of the EAO Regional Councillor in Cebu. A Rectors meeting was held on the first day, along with the various sector commissions and in the early afternoon the Provincial Council meeting, presided over by the Vice-provincial Fr Geronimo Honesto Jr.

During the opening day of the Extraordinary Visitation, thoughts on the Rector Major’s Strenna 2019 “Holiness For You Too!” were shared, and the “how” to accompany the numerous lay mission partners (with adequate involvement, formation at professional level and in the Salesian way of education) was among the main themes for discussion.

Before starting the first community visitation, Fr Václav, together with two provincial councillors, paid a courtesy visit to the Archbishop of Cebu, Mgr. Jose Serofia Palm. Together with the whole Catholic Church in the Philippines, Cebu too is preparing for the 500th anniversary of evangelization; and as part of this Year of the Young, Cebu will hold the National Youth Day next April 23-28, 2019.

Then Fr Klement embarked on his journey of knowledge and animation in the various Salesian houses and presences of the Province.

For the feast day of St John Bosco, he blessed the new novitiate chapel of St Francis of Sales in the Don Bosco Formation Centre Talisay, Lawaan, with Salesian Family members, students, benefactors, novices and aspirants as witnesses. He gave also a short message on the importance of the Salesian vocation which is strengthened by one’s dedication to Mary Help of Christians and the effort to learn from the wisdom shared by Francis De Sales in his writings. The chapel was built through the contribution of several Salesian provinces, benefactors in the Philippines and abroad.

Just a week before, on the occasion of the feast of St Francis de Sales, Fr Francis Gustilo, SDB, in that same chapel had blessed the three statues adorning the apse: a crucified Christ, Mary Help of Christians and, indeed, the patron, St Francis of Sales.

For the Feast Day of Don Bosco, moreover, Fr Klement presided also the solemn Holy Mass with the Salesian Family in the Archdiocesan Shrine of Our Lady of Lourdes, Cebu. Representing the Salesian Family were the ADMA, the Cooperators, Past Pupils, the Kindergarten students, the parishioners of the Shrine, the Aspirants, Pre-novices and Novices of Don Bosco Formation Center. In his homily, Fr Klement stressed the importance of communication among the Salesian Family members in the Philippines. He also shared the message that the Rector Major gave to the youth of the world, highlighting the challenge that “they too can be holy”.

The FIS province is made up of 15 canonical communities in the Philippines (Negros, Cebu, Panay, Eastern Samar and Mindanao islands) and in two in Pakistan. There are 115 Salesians (4 novices, 24 in temporary profession and 87 with perpetual vows) with 16 Salesian Brothers and 69 Salesian Priests. There is a large variety of apostolic works: 9 vocational training centres (TVET-VTC), 11 Youth Centres, 7 parishes, 4 academic schools, 4 retreat houses, 2 youth at risk homes, 2 schools for religious formation, one after-care home for youth in prison; in Pakistan there are two schools, one vocational training centre and one youth centre.

The province of Mary Help of Christians was established in 1992 and it is relatively young - average age of the confreres is 46 years, and it is rather dynamic with a missionary spirit - both at home as well sending ad gentes missionaries abroad. Both in Mindanao and in Pakistan the FIS Salesians are involved in daily contact with Muslim youth, a good opportunity for daily inter-religious dialogue of life.

The end of the 2019 Extraordinary Visitation in the FIS Province is scheduled for April 25th.