Argentina – The Past Pupils of America are with Pope Francis 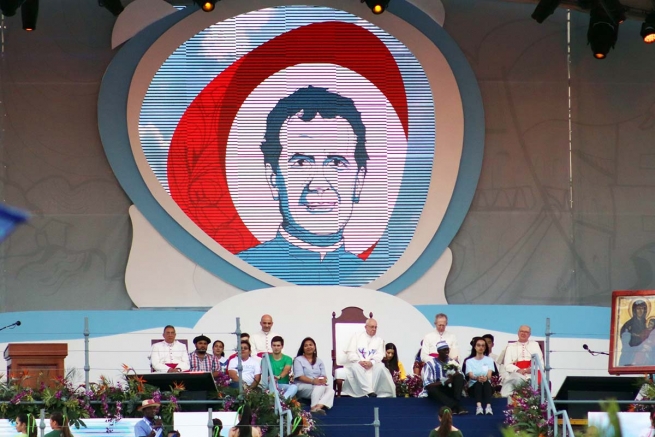 (ANS - Buenos Aires) - The federations of the Past Pupils, men and women, of Don Bosco and of the Past Pupils of the Daughters of Mary Help of Christians (FMA) of the American continent have drawn up and signed a document expressing their support for the pontificate of Francis, who enthuses them for the Synod of Bishops on Youth, the WYD in Panama, and the forthcoming anti-pedophilia summit. "We live in a unique and unrepeatable ecclesial context for young people," they say.

The Salesian charism, 131 years after the "birth to Heaven" of Don Bosco, finds its continuity in Pope Francis. This process is claimed by the lay men and women of the Salesian world in the American continent, through a document in which they bring together the Rector Major, responsible for the world's second largest male congregation, and the first Latin American Pope in history, with Salesian roots and then ordained priest in the Society of Jesus.

Don Bosco's work developed in Argentina, the first country on the first continent outside Europe to be reached; in these "arid societies," say the laity of Salesian circles, "has taught us to serve others and to generate processes, rather than just occupy spaces, as the Evangelii Gaudium affirms," continue the Past Pupils of Paraguay, Argentina, Bolivia, Peru, Puerto Rico, Dominican Republic, Cuba, El Salvador, Guatemala, Honduras, Haiti, Canada, Chile, Uruguay and USA.

The Past Pupils, male and female, of the two institutes of the Salesian Family believe that the recent Synod, "of undoubted Salesian flavor" and the "effective and affective" presence, took note of the desire of young people to be heard and accompanied while they circulated along the modern "motorways of life" at speeds that often do not allow them to pay great attention "to others."

For the federations of Past Pupils of Don Bosco and of the Daughters of Mary Help of Christians of America "we are not adrift: we navigate under the guidance of Mary Help of Christians, with empty pockets, far from the temptations of the devil, without sensationalism or superficiality." For this reason they ask the Salesians to become "driving generators of trends in the current digital age, curating our dear charism in every detail."

And to deepen the empathy with young people the necessity of accompanying "the generations of Millennials and Z" is underscored and emphasized.