RMG - Letter of the Rector Major on the killing of Fr Antonio César Fernández, SDB 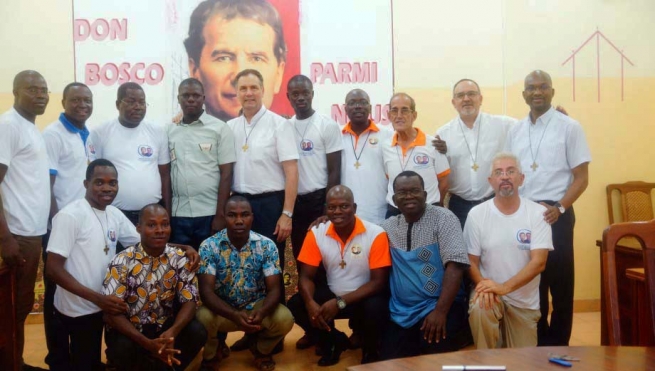 Fr Antonio César Fernández, to the right of Fr Horacio López, Secretary of the Rector Major, on the occasion of Fr Ángel Fernández Artime's visit to the Francophone West Africa Province (AFO)

(ANS - Rome) - To my Salesian Confreres, to the Salesian Family in the world. My dear brethren, it’s just a few minutes I have arrived in Rome, “Sacro Cuore”, on my return from Ireland, where I was doing the visit to the Province of St. Patrick, whose headquarters are in Dublin, and I right away get in touch with all of you.

The reason for this is the sad and painful news that came a few hours ago, during the night, which informed me that our Salesian confrere Fr. Antonio César Fernández, missionary in Africa since 1982, has been assassinated yesterday (February 15, 2019, Ed.) at 15.00 hours local time, with three shots during a jihadist attack perpetrated at about 40 kilometers from the border of Burkina Faso. Fortunately, two other confreres managed to survive the attack. They were coming from Lome, after celebrating the first session of the Provincial Chapter of the AFO Province.

Dear brethren, there are many days during the year in which I receive the news of the demise of Salesian confreres for natural causes. This is the law of life, and it will come for us as well. In such cases, however, we give thanks to the Lord for so many beautiful lives generously donated.

But our confrere Antonio César war deprived of his life, they killed him without any reason. He was a good man, a man of God who, like the Lord, spent his life “doing good”, especially among his beloved African people. Antonio Cesar was 72 years old, with 55 years of religious profession and 46 of priestly life. We had met a few months ago in Burkina Faso, precisely in his community of Ouagadougou, where he was Rector and Parish Priest.

Antonio Cesar adds to the number of many other martyrs of the Church today in the world (some of whom are Salesians and members of our Salesian Family).

I invite you to thank the Lord for the beautiful life of our Fr. Antonio César. And also to ask God the Father to help humankind to put an end to this escalation of violence which only causes damage. May the Lord grant that César’s blood, shed in African land, be the seed of Christians, faithful followers of Jesus, and of young vocations at the service of the Kingdom.

Dear brethren, let us proceed more united than ever in the service of the Peole of God, and of the pooerst youth. Evil never has the last word. The Resurrection of the Lord clearly shows this to us, and it follows that, even in suffering, it is becoming a reality that the Lord transforms everything.

An embrace and a prayer from all of us for the eternal rest of Fr. Antonio César. As well as our affection to his family in Pozoblanco (Spain) and wherever they are, to the beloved Province of AFO to which he belonged and to the Province of Maria Auxiliadora in Spain where he learned to love Don Bosco and to live like him.