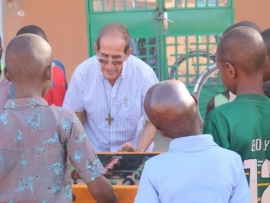 (ANS - Rome) - In the eyes of God every creature has the same, inestimable value; but for us human beings, no matter how hard we try, it's sadder and more painful when a person we knew, we appreciated, is stolen away from us. Fr Antonio César Fernández, SDB, over the years has left behind many good memories even among the Salesians at Salesian Headquarters and in the editorial staff of ANS.

Fr Eusebio Muñoz, Delegate of the Rector Major for the Salesian Family, was one of the closest friends and collaborators of Fr Fernández. Born in the same city, in Pozoblanco, they attended the same high school and completed the novitiate one year later. Fr Muñoz was the first to verify the missionary discernment of Fr Fernández when, in the early 1980s, he manifested his desire to go to serve young Africans. A few years later, as Provincial, it was Fr Muñoz to assign the position of Master of Novices in that region of Africa to Fr Fernández.

"He was a man of exceptional goodness and great intelligence, convinced of his vocation," recalls Fr Muñoz. "When we were studying in the community of Ronda our classmates said that it took him only a week to do what they needed a year for."

"He was aware of the risks involved," continues Fr Muñoz. "Once while I was visiting the African communities, we were stopped by militia, who threatened and attacked us. But he wanted to stay there and would repeat to me: 'I won't go back to Europe.' And he shared everything with the young Africans: he slept on the ground, drank water from the streams ... There was no way to make him change. He wanted to testify to the young people his complete donation."

Fr Martín Lasarte, from the Missions Sector, also had the chance to collaborate with Fr Fernández on several occasions, to organize several events in the Africa and Madagascar region. "He transmitted the Salesian charism to the Africans; as Master of Novices for 10 years he formed generations of African Salesians. And today it is no coincidence that the Provincial of AFO is indigenous."

"He was happy; his was a life in the service of young people," continues Fr Lasarte. "Service and availability were his hallmarks. If we asked him for translations, he was always ready, to organize, to prepare ... He had already said yes to the request to accompany the Orientation Course for the Missionaries of the 150th Missionary Expedition, next September."

In 2011 he had released an interview with ANS to talk about the social difficulties in the Ivory Coast. Again on that occasion he testified his concrete attention to the needy population, the refugees, the most fragile people ... And he also spoke to us about his personal and Salesian commitment to promote interreligious dialogue.

"Working with him was a joy," concludes Fr Muñoz. "As other people who knew him also wrote to me, I am convinced that he has also forgiven his murderers."