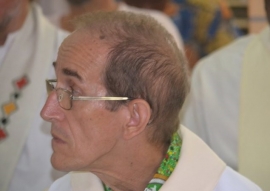 (ANS - Lomé) - The violent death of Fr Antonio César Fernández was a blow to the Salesians and young people of the Francophone Province of Western Africa (AFO). "He helped us a lot to grow in Salesian formation"; "He was a model of religious life, a saint," say the testimonies that continue to arrive from that part of Africa. While the dynamics of the aggression that led to the death of the Spanish missionary are being investigated, the Salesian communities in Togo have programmed various funeral vigils and celebrations of suffrage.

The Salesians of Togo have been watching over the remains of Fr Antonio César since the afternoon of that tragic 15 February. According to the latest reports, before the attack on the Salesians, the jihadist militiamen had already attacked a customs office and killed four people in the ranks of the customs officers. When Fr Fernández and the other two Salesians accompanying him on their return from the first session of the Provincial Chapter arrived on the scene, they thought they were being stopped for a routine border check. Instead, they were surrounded by armed men, who separated them, then shot Fr Antonio César and fled the scene.

The Province has scheduled vigils and celebrations to allow all those who loved Fr Fernández to wake over him in one last greeting. Tomorrow afternoon, 20 February, prayer vigils are scheduled in the various churches and pastoral communities animated by the Salesians of Lomé. On Thursday, a Eucharist will take place in Lomé and then in Gbodjomé, just on the outskirts of the Togolese capital.

On the evening of Friday 22, another vigil will take place at the "Mary Help of Christians" parish of Gbenyedzi, in Lomé, with four Masses, celebrated throughout the night, animated by the various groups.

Finally, on the morning of Saturday 23rd, at the same parish, the funeral of Fr Antonio César is scheduled. In addition to the current Provincial, Fr José Elegbede, the two predecessors, Fr Faustino García Peña and Fr Manolo Jímenez will also participate.

Although Fr Antonio César had expressed his desire to be buried in Togo, the Spanish religious' family requested his body.