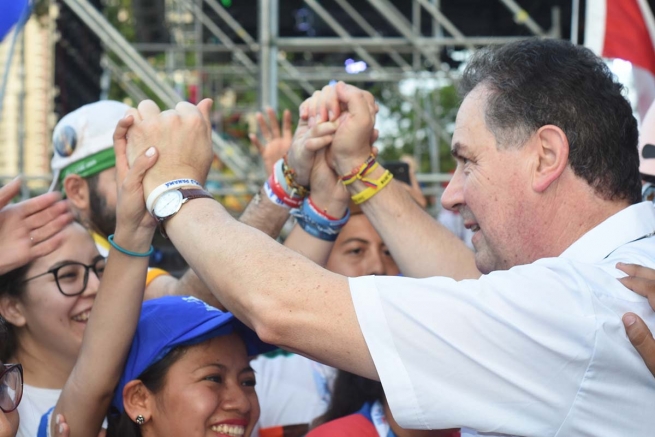 (ANS - Rome) - The Rector Major continues his journey of knowledge and animation across the Provinces of Central and Northern Europe. A few days after his return from Ireland, tomorrow, Wednesday 20 February, Fr Á.F. Artime begins the Animation Visit to the Province of France-South Belgium (FRB): a visit that will allow him to learn about many examples of success in the Salesian mission shared between religious and laity.

After the arrival in Lyon and a first meeting with the city's Salesians, official activities start the following day. On Thursday 21, he visit the large Salesian school complex "Notre Dame des Minimes". Here, the X Successor of Don Bosco shall first meet with the laity and religious who animate the educational project of the school - the "Tutelle", in the local technical jargon - ensuring its fidelity to Salesian charism and the principles of Catholic education. Then he will gather with the young people who animate Salesian youth pastoral projects, as part of the "Defís Citoyen" program.

In the afternoon, he meets with the community that offers formation to lay collaborators in the Salesian mission, this at the "Jean Bosco" center, and the day ends with a Eucharist for the Salesian Family and friends of the Don Bosco's work.

On Friday 22, the Rector Major goes to Paris and the Provincial House to meet the leaders of the network of Salesian organizations "Don Bosco Action Sociale", and, subsequently, the Provincial Council. He will spend the afternoon and evening at the Salesian center of Argenteuil.

The Rector Major will dedicate Saturday 23 to the assembly with all the Salesians of the Province, and then to the young people of the Salesian Youth Movement (SYM), with whom he shall dialogue in the afternoon and celebrate in the evening.

On Sunday 24, the Rector Major goes to Belgium. He will preside at the Eucharist in Liège, meet the local Salesian Family, and go to Farnière to learn about the work carried out by Salesians, Daughters of Mary Help of Christians and Laity in different locations of the FRB Province - Lyon, Paris, Lille and Farnière.

Before returning to the Salesian HQ in Rome, Fr Á.F. Artime shall make a short stop in Luxembourb on Monday morning, 25 February.