Italy - Hadidi: from Morocco to businessman via Salesian education 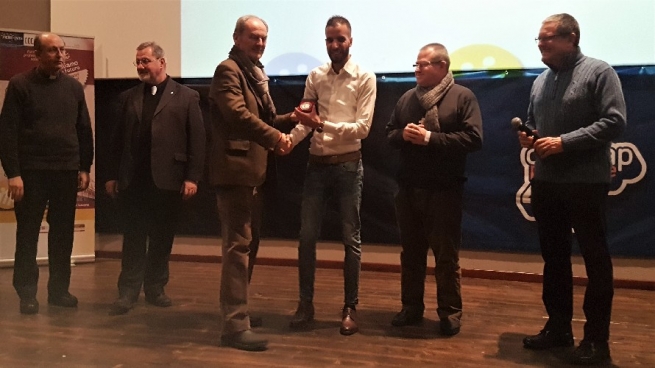 (ANS - Bra) - A case of fully successful integration, where the education and vocational training offered by Salesians played a fundamental role: the story of Hadidi Lakbir, 30, now married and father of a child. 25 years ago he arrived in Italy from Morocco to join his father who worked for a local business. But today it is Hadidi himself who has become an entrepreneur.

It is now 10 years since Hadidi has started and owns "Omh - Soluzioni Tecnologiche" in the town of Cavallerleone, a company with which he put himself at the service of the mechanical production companies in the provinces of Cuneo and Turin. He is a past pupil of the Vocational Training Center (CFP) of Bra and, filled with emotion, he told his story during the awarding of diplomas to the students of Salesian CFPs in the province of Cuneo, on 4 February.

"I joined my family in Sommariva Bosco about 25 years ago. My father, who had arrived from Morocco, was working at a company in Ceresole d'Alba when we reached him in Piedmont. I remember with pleasure the elementary schools, with the teachers who helped us a lot. I also remember with gratitude the Salesians of Bra who educated me, even if I am of a different religion from the Christian one, and they trained me as a technician."

Hadidi has been working on his own for almost 10 years and for this reason he is grateful to the Salesians: "They have helped me a lot in my role as an entrepreneur. My technical and human formation was guided during the three years I attended the Salesian Institute 'San Domenico Savio' of Bra."

His testimony has highlighted the quality of an integral and comprehensive formation - in technical skills, as well as in values: "I have learned a lot from the Salesians in Bra, both from a professional and a human standpoint. I'm of foreign origin, but thanks to this education I managed to fit perfectly in the production sector in which I have been operating for many years."

During the ceremony for the awarding of diplomas to the young students of Salesian CFPs, Hadidi received a prize from the General Director of the CNOS-FAP of Piedmont. He then concluded by addressing the students who have attended the very same workshops, a few years later.

"I wish all the students present to find their way to work as I did," he concluded. "I thank the Salesians of Bra again for what they have