Malta – “Now I have a daughter in Sierra Leone”: touching encounter with President of Malta 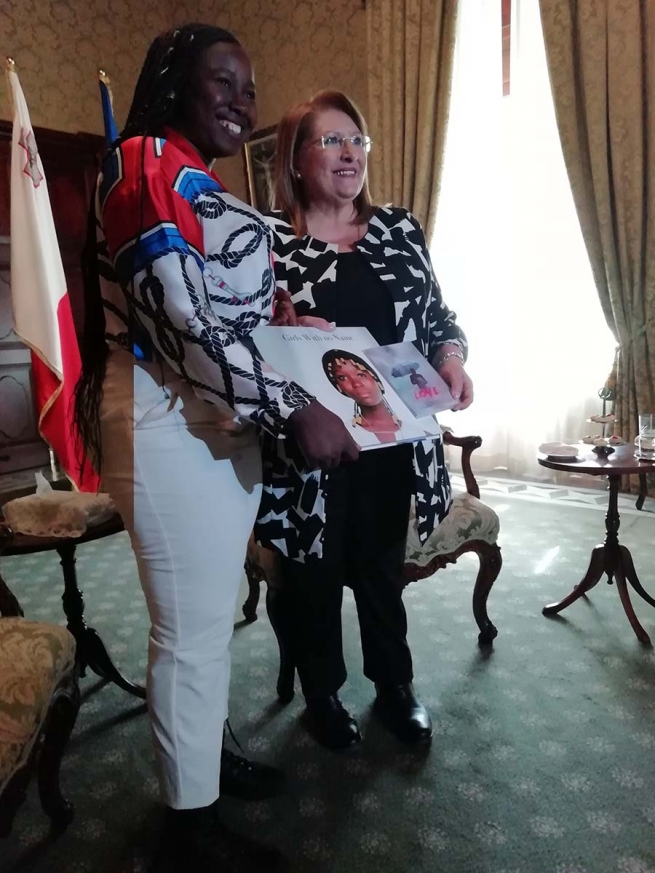 (ANS – La Valleta) – In the framework of the Conference “Lost in Migration”, that is taking place in La Valleta,  a delegation of seven people from several Salesian provinces were received by the President of Malta, H.E. Marie-Louise Coleiro Preca, that devoted over half an hour of conversation on the Rights of Children and Migrants.

After listening to the personal story of Augusta Ngombu-Gboli, after receiving from her the documentary “LOVE” and the book “Girls with no name”, Marie-Louise told her that all girls now have a name and a face like her to transform reality, as she was giving them a name and a voice, thanks to her courageous testimony.

Augusta shared her story and her change, from living in the streets and prostitution to be a teacher and entrepreneur thanks to Don Bosco Fambul in Sierra Leone, and she shared her dream of opening a restaurant there and to be able to invite Her Excellency for lunch. The President, visibly touched, answered that she had a 27 years-old daughter but now she had a new daughter in Sierra Leone, called Augusta and that for sure she would help her, up to the point of giving her personal email and phone to stay in touch. Augusta intended to kneel down as done in Africa, as a sign of gratitude, but the President did not allow her and hugged her, while her “new mother” consoled and encouraged her.

The Delegation had a chance to explain the Salesian work in several places in the world: in Sierra Leone through Don Bosco Fambul (Fr Jorge Crisafulli), around railway stations in Italy through Salesiani per il Sociale (Fr Carmine Ciavarella) and the awareness raising game “En route avec les migrants” from FRB province (Br Pierre-Jean Allard); and finally, about the institutional effort done at European Institutions, such as the initiative of the film LOVE developed by Misiones Salesianas.

The President thanked the Salesians for their work and offered suggestions and institutional recommendations to increase the impact of our educational and pastoral work. Fr Antoine Farrugia explained his work with government agencies at technical level that he is doing in favour of young people in need and leaving care, fully supported by the President.

When saying goodbye, the President’s assistants hugged Augusta and thanked her for her testimony, commended her strength and encouraged her to fulfil her dreams. It was a very touching moment for everybody, including the President, who encouraged us to continue working at both grass-roots levels and institutional levels in the international organisations.

Briefly, another life lesson… from Augusta and from Malta’s President.