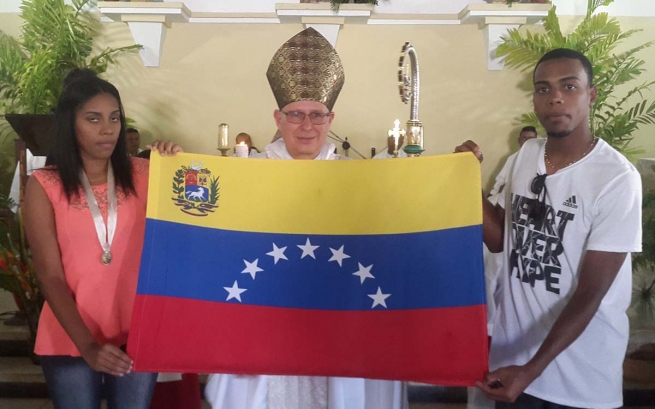 (ANS - La Guaira) - The crisis in Venezuela continues, further worsened when Nicolás Maduro prevented the entry of humanitarian aid for the Venezuelan people. As the days passed, the political crisis worsened the social crisis and in attempts to seek food and receive aid, five people died, hundreds were wounded and hundreds more were imprisoned. The Church, for its part, is undoubtedly close to the people. Monsignor Raúl Biord, a Salesian, wrote a letter demanding an end to the violence.

Health and peace in the Lord Jesus Christ. What happened at the border is a crime that screams to Heaven. The attack and killing of unarmed civilians by armed gangs and the destruction of medicines and food implies a serious responsibility under international law, which provides for severe penalties. We thank the majority of the military, soldiers of the homeland, who respected the people. But we deplore the few who have become accomplices of these crimes and who have allowed armed groups to attack the population.

We reiterate what the presidency of the Episcopal Conference stated in its recent message of 21 February:

"The country needs humanitarian aid. The regime has the obligation to meet the needs of the population, and therefore facilitate the entry and distribution of the same, avoiding any kind of repressive violence. To ask for and receive aid is not a betrayal of our country; on the contrary, it is a moral duty that belongs to all of us, faced with the dramatic shortcomings and urgencies of the Venezuelan people." (No. 2).

And further on: "We are against all types of violence. We call on the National Armed Forces to stand on the side of the people to whom they belong. The oath to enforce the Constitution (...) has as its main recipient the Venezuelan people: it is the commitment to defend the people, to protect their inalienable rights and to make their human dignity shine. In conscience they do not have to execute orders that threaten the life and safety of the population. In such circumstances they must allow the entry and distribution of international aid." (No. 6).

Let us pray to the Lord for Venezuela in these difficult times, so that the violence and bloodshed may cease and peace be re-established, so that our country may walk along paths of progress and freedom.

Virgin of Coromoto, renew faith, hope and love throughout our homeland.

With my prayers and blessings, Msgr. Raúl Biord, bishop of La Guaira