Paraguay - Protests from students and parents: "We want to be formed, but they want to mutilate our future, kill our dreams" 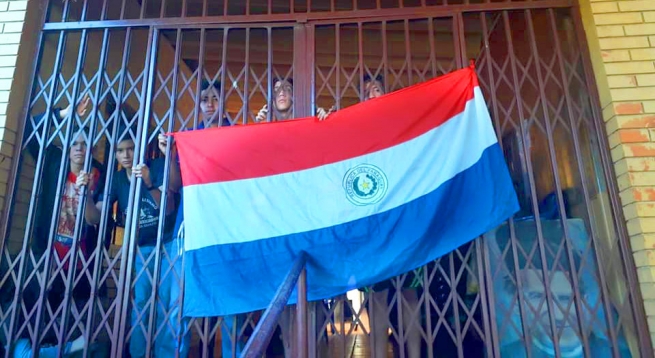 (ANS - Minga Guazú) - In recent years, Paraguayan students have protested on various occasions to demand an improvement in education. The Salesians are not strangers to this issue and in recent days the Salesian Technical School of Minga Guazú has carried out protests in which the students have asked for the government's commitment.

"We want to be formed, but they want to mutilate our future, kill our dreams," said the students of the Salesian Technical School "María Auxiliadora" of Minga Guaz at a press conference, protesting for the lack of support for teachers in the first year.

"We are fed up with promises. Education should not have only one color, but the colors of our flag," said the young people at another time, facing a situation that affects more than 100 pre-enrolled students, who still cannot start the first-year lessons at the center.

Faced with the lack of government support for teachers, in the second week of February, about 300 people among students, teachers and parents of the Salesian technical school barred Ruta 7, the national route of Paraguay, with stalls. With the use of force, the students asked the Ministry of Education and Science (MEC) assign resources for the vocational courses for Electro-technicians, Agricultural Mechanics, General Mechanics and Agro-mechanics.

The "María Auxiliadora" institute offers over 300 students a high school that is unique in its kind in that area.

After completing 36 hours of occupation, the students of the institute interrupted this measure of protest.

The director of the school, Fr Pablino González, SDB, explained that the Departmental Education Coordinator, Eligio Martínez, has provided support for over 1,800 hours of teaching and that there is a commitment to increase resources in the coming months. The municipality also promised to pay a monthly contribution.

On February 21, resolution n.1179/2019 was signed, with which the District Municipal Council declared the "Educational Emergency" to accelerate efforts to obtain the resources the school required.

In this way, the lessons were able to resume regularly today, Monday 25 February. Tomorrow, Tuesday 26, Ceferino Ruiz, Director General of the Ministry, is expected and he shall be accompanied by Fr Mario Villalba, Provincial of the Salesians.

This will give rise to a round table that will also be attended by the Departmental Director of Education, Eligio Martínez; the Supervisors Francisca Benítez de Rios and Gill Montiel; the deputy Blanca de Caballero; the mayor Digno Caballero; student representatives and Fr Pablino González.