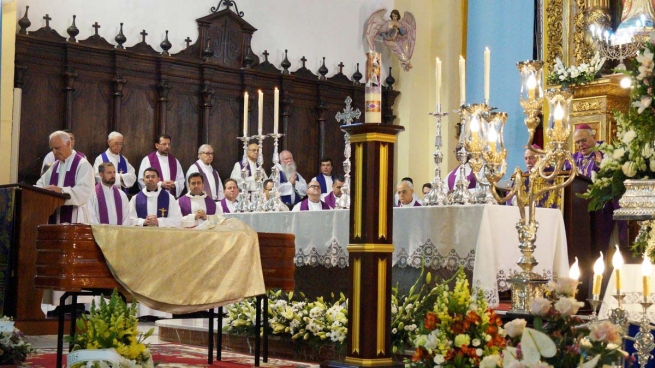 (ANS - Pozoblanco) - On a very important day for the Spanish municipality of Pozoblanco, which celebrated the feast of its patron, the Virgin of the Moon, on February 25, the funeral of an illustrious citizen of the Andalusian town took place: Salesian Fr Antonio César Fernández, victim of a jihadist attack perpetrated about 40 kilometers from the southern border of Burkina Faso.

During the celebration, which began at 5 PM, at the parish of Santa Caterina, the statue of the Virgin of the Moon, which had been carried in procession in the morning, was throughout beside the main altar, close to the coffin containing the remains of the Salesian priest.

Presiding at Mass was Mgr Demetrio Fernández, bishop of Cordoba, flanked by Msgr Miguel Angel Olaverri, SDB, bishop of Pointe-Noire, Republic of Congo, and many Salesians from Spain, various African countries, from the Salesian headquarters in Rome. Among the civil authorities present, the Delegate of the City Council, Antonio Repullo; the mayor of Pozoblanco, Santiago Cabello; the mayor of Dos Torres, Manuel Torres; the MP Isabel Albás; and the provincial deputy Andrés Lorite.

"I want to say a few words of closeness to relatives and Salesians," said Msgr Fernández in the homily. "The Salesians in Pozoblanco have borne fruit, especially the ripe fruit that is Father Antonio Cesar ... As a missionary he made it clear that life can be lived in another way, not only to enjoy it, but also to donate it."

There were many words about this missionary that resounded during the homily, but one in particular drew attention: "Today a saint is buried." His holiness was that of daily life, in a life offered fully to the poor, to the young. He lived an "ordinary" holiness, as defined among Salesians. "If in his life he was a great apostle, in his death he was even more so", it has been said. In this way the city of Pozoblanco gave a last goodbye to Fr Antonio César Fernández.

"Today we remember Mgr Luigi Versiglia and Fr Callisto Caravario, missionaries and martyrs," observed Fr Teodoro Castillejo, Director of the Salesians of Pozoblanco. "We will never forget Father Antonio Cesar, his incomparable witness of humanity, his dedication, his simplicity, his Salesian disposition, his missionary spirit of predilection for the last to whom Jesus Christ announced and his intimate devotion to the Virgin under the intimate title of Auxiliary. May the good Lord grant that this blood shed on African soil be the seed of new Christians, faithful followers of Jesus Christ."

At the end of the Eucharist, the remains of Fr Antonio César Fernández were carried on the shoulders of his Salesian confreres to the Salesian pantheon in the cemetery of Our Lady of Sorrows in Pozoblanco, the place where he was born 72 years ago.

On the web there is a video on the Salesian's funeral: https://www.youtube.com/watch?v=Hfl8RoOFWAI