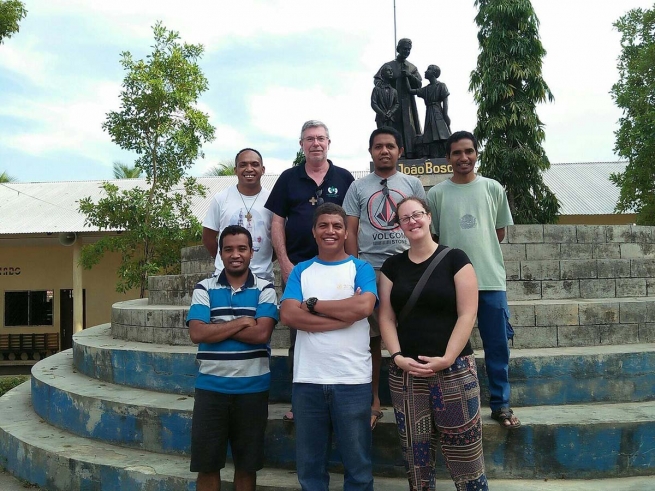 (ANS - Dili) - Less than a year after the invitation from Fr Apolinario Neto, Superior of the Vice Province of Timor-Leste (TLS), two young volunteers from the "Cagliero Project" - the missionary voluntary program of the Australian Province - arrived in East Timor, respectively in Los Palos and Dili. They are Keith Collins, from Perth, and Alasdair O'Brien from Melbourne, who already live in their respective communities and wanted to share their first impressions.

"It's an honor to be one of the first volunteers of the Cagliero Project in East Timor. I have certainly received a fantastic welcome and I'm determined to help as much as possible and at the same time learn from the local community. The prenovices of Los Palos are very interested in improving their skills in English and are really curious about Australia. Here there is a real cultural crossover," said one of the two volunteers. "There is a unique link in history between Australia and East Timor and the Cagliero Project is now further strengthening this link," he added.

"The welcome at the Don Bosco Centec Vocational Training Center in Dili-Comoro has been unique. Here I help three young Salesians with English lessons. In particular, we make prayers and readings in English to improve the language, so they will be prepared if they want to study abroad," added the other volunteer.

Keith and Alasdair then wanted to emphasize how much they were amazed by the great faith of the people of East Timor. "It's striking to see how much faith there is in the Timorese, despite the difficult conditions of life. This is undoubtedly the fruit of constant missionary activity in this land," they said.

The Cagliero Project fosters solidarity among the different Provinces and, precisely in the name of this solidarity, the volunteers who are part of it have been sent not only to East Timor, but also to Thailand, Cambodia, Samoa and Zambia.

The volunteers of the Cagliero Project are committed to working in the Salesian manner, which means that young people are placed at the center of all the work. This gives young people the opportunity to contribute to the mission of Don Bosco, that is, to serve the poorest and most disadvantaged children and make them become good Christians and honest citizens.

To learn more about the project, you can visit the website: https://www.cagliero.org.au/