Austria - The advice of Fr Á.F. Artime: "To look at every person as God would look at them" 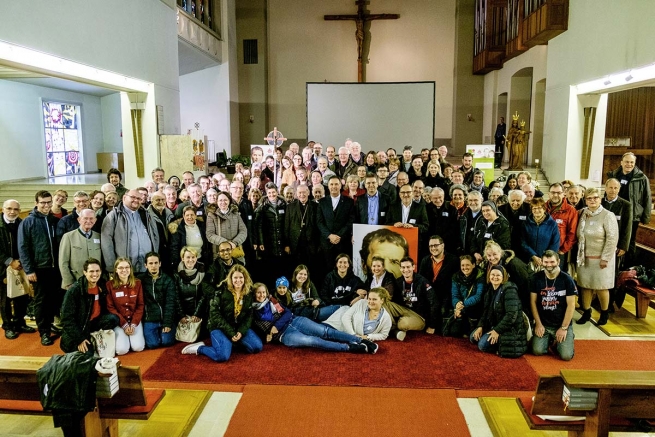 (ANS - Vienna) – On Friday, March 1 2019, Fr Ángel Fernández Artime began his visit to the Austrian Province. During the various appointments, the Rector Major made several appeals to welcome and live, like Don Bosco, in the search for daily sanctity.

The first step was the Salesian grammar school in Unterwaltersdorf. Always among children and young people, the Rector Major invited teachers to educate the younger generations to a critical mentality free from manipulation, and concluded: "I am happy that the values of Don Bosco are lived in your homes."

In the afternoon, having reached Vienna and met with the Provincial Council of Salesians and the lay leaders in the Salesian houses of Austria, Fr Á.F. Artime met with the young people of the Salesian Youth Movement for "Giovanni's Party Night" - an evening that combined reflection, prayer, dancing, singing and entertainment. During the party, a prayer for peace in 11 languages resounded throughout and the Rector Major recalled some episodes he had lived in Syria and stressed that in the 134 countries where Salesians work, no one is ever a foreigner.

On the morning of Saturday, 2 March, the large gathering of the Salesian Family took place with the Rector Major. With about 250 present, Fr Á.F. Artime spoke about the Strenna for 2019, indicating paths to live the daily sanctity: "Everyone should ask himself: 'How can I give every day the best of myself as a Christian? My life is there because I share it with others."

The morning then continued with several artistic workshops that represented the creativity and areas of service of the Salesian Family in Austria - such as Salesian volunteer programs or the "Feel Like a Refugee" project, with which one can experience the situation in asylum procedures with the Salesian association for juvenile refugees.

In the afternoon, in the Eucharist, the Rector Major thanked everyone for the talents shared during the day and concluded by inviting, as Pope Francis does, to "look at every person as God would look at them."

Yesterday, Sunday 3 March, the Rector Major went to the Salesian parish of Stadlau, in Vienna, where the Salesians have been working for 100 years. In the Sunday Eucharist, concelebrated also by the Councilor for the Central and Northern Europe Region, Fr Tadeusz Rozmus, and by the Salesian Provincial of Austria, Fr Petrus Obermüller, Fr Artime reiterated once again the wealth that different cultures bring with them, and reminded everyone that if at times the world seems cold, in truth there is much widespread humanity and goodness all around. Don Bosco is also a model in this, because "he has always believed that in every young man there is a point accessible to goodness."