Papua New Guinea – No matter the quantity, but the quality: the hint by Br Muller, SDB 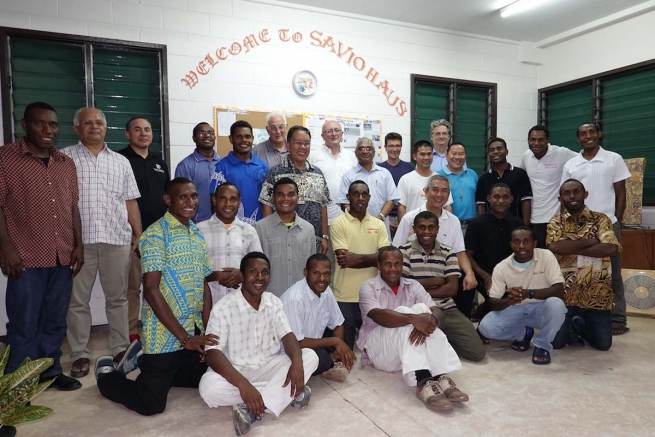 (ANS – Port Moresby) – Br Jean Paul Muller, SDB, Economer General of the Salesian Congregation, is on a visit to the Salesian Vice-Province of Papua New Guinea and Solomon Islands. “Be definite about your choice of vocation,” Br Muller said as he spoke to the aspirants and the Salesians at the Good Night at Savio Haus, Bomana, on 1 March, 2019.

The Economer General highlighted the need for committed and dedicated confreres. “As a Congregation we are concerned not about numbers, but about the quality of each aspirant,” he continued as he invited all to reflect on their call to a Salesian vocation.

He was received warmly at Savio House and was joined by Archbishop Francisco Panfilo SDB, Archbishop of Rabaul (Solomon Islands) and Bishop Pedro Baquero SDB, Bishop of Kerema (Papua New Guinea). At the family circle held during supper, the aspirants sang and danced for the visitors. The confreres sang for Fr Dominic Kachira SDB, Rector of Savio Haus as he celebrated his birthday.

Earlier in the day, Br Muller had visited the “Don Bosco Technical School”, Gabutu, where he addressed the staff. He appreciated the openness of the educators. He then visited the “Mary Help of Christians” Parish at Sabama, located in a very difficult and dangerous settlement. He spoke to the parishioners and the young people who gathered to meet him.

Br Muller is accompanied in his tour by Br Alberto Rodríguez SDB, Dr Fabio Buconi, Dr Janko Jochimsen and Fr MC George SDB; he and the other visitors are in Papua New Guinea for the EAO Provincial Economers’ Meeting, to be held at Boroko East (March, 3-7). While in the country, they will also visit a few Salesian houses.