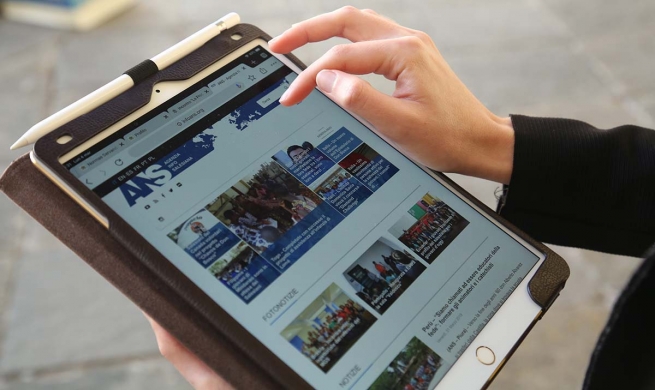 (ANS - Rome) – Being present on Social Networks is a fundamental element for anyone involved in communications. Even in the recent World Consultation (aka Consulta) on Social Communication, the role social networks play in today's society and how useful they can be towards reaching young people was widely discussed.

For this reason ANS, which has always proposed to be a window on the Salesian Congregation in and across the globe, has decided to renew itself on Facebook, which today still remains the "leader" of all social networks, as regards exchanges and interaction among users.

From this moment on, the Facebook page of ANS - which published posts in Italian, English and Spanish - will now publish in the six languages already used on the website (Italian, English, Spanish, French, Portuguese and Polish), so all users can read the contents in the language they prefer.

To do so, ANS will use the "multilingual post" option, a function recently activated by Facebook that allows followers of a page to view posts directly in their default language. In this way, readers with their profile set in Italian will read the contents in Italian, those in Spanish will see them in Spanish, and so on.

The publication with the "multilingual" method arises from the need to reach as many users as possible. From a study of the page "insights", in fact, it emerges that the languages most spoken by our followers are, in order: Spanish, French, Italian, English, Portuguese and Polish. Moreover, continuing to publish only in Italian, English and Spanish would have been an obstacle for the rest of our virtual audience, one we've decided to overcome.

This is a choice that, we are sure, will be appreciated by all users who follow ANS on a daily basis. To them, now approaching 22,000 readers, goes our most heartfelt thanks!

Thanks to the trust of our followers, the ANS Facebook has reached, over time, peak coverage of our posts that were very high. To cite an example, on the occasion of the 203rd birthday of Don Bosco, August 16, 2018, our Facebook page reached a total of 149,072 views.

In addition, ANS continues to be present and to inform on other social channels as well.

The six Twitter profiles - one for each language - count 7,549 followers; on Flickr, from 2015 to today, almost 29,000 photographs were published and the agency has a professional profile; on YouTube the videos present on our ANSChannel have achieved a total of 937,003 views.

Then there's the news of this last year, Instagram. Opened in February 2018, today the agency's official Instagram profile has 2,145 authentic followers, with an engagement rate of between 7 and 8%.

ANS aims to grow and develop further again, always with the aim of providing accurate and timely information. Not only that. What ANS, as a means of Salesian communication, aims to do today and in the future, is to reach as many young people as possible, to know their interests and their points of view, to open with them a space for dialogue, not just make them feel like passive readers, but rather an integral part of this reality.