Liberia - Living the faith in the peripheries ... of the forest! 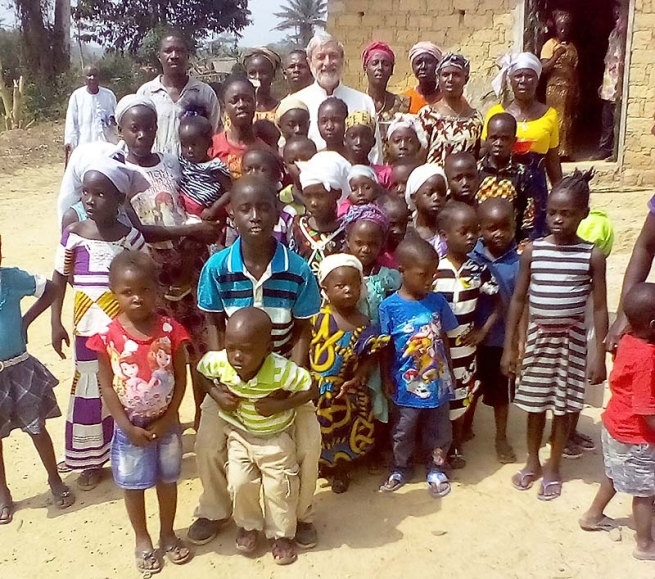 (ANS - Tappita) - The Salesian mission at Tappita, restarted at the beginning of 2018, after years of forced absence, is "at the far edge of the world", within the Liberian forest. Yet there are even more peripheral realities: like the villages of Sahnpa and Zeah, which Salesian missionaries managed to visit for the first time just a few weeks ago, after more than a year after their arrival to the area. "Last year, the rains started early and so they took us by surprise," explained the director of the mission, Fr Riccardo Castellino.

Currently Sahnpa has no real church as the one they had was crushed by a tree in 2016, felled during a bad storm. To avoid the complete dispersion of the community, one of the members of the village has made available a room of his house for Sunday meetings.

After having recalled the faithful with the bell - "or rather, beating on that wheel rim of truck that serves as a bell," continues Fr Castellino - in that room a dozen people gather, surprised to see the priest, but extremely pleased to see that they have not been forgotten.

After the Mass, the Salesian is accompanied to see the place where the church stood, and where the community intends to rebuild it: it is an expanse of brushwood, where there are already many reconstruction materials: the blocks of mud, the timber cut and stacked, the metal sheets, "even if still more are needed, but the money is gone" ...

In order to get the work starting again, the first step is to clean up that site, but for the construction there is still a lack of cement and tools and material required by manpower. For this reason, Fr Castellino asks the community members to make a donation and send it to him. "We will try to do something to make sure that with the arrival of the rains, this community has a roof under which to gather to pray and grow in faith," he concludes.

In Zeah, on the other hand, there had been another Salesian the previous week, who said that not only did the inhabitants not have a church, but they had never even had one: the Mass was celebrated under the palava hut of the village, the kiosk used for village meetings.

"With the church or without the church, faith survives! But we commit ourselves to doing something for them too ... and to visit them a little more often," concludes Fr Castellino.