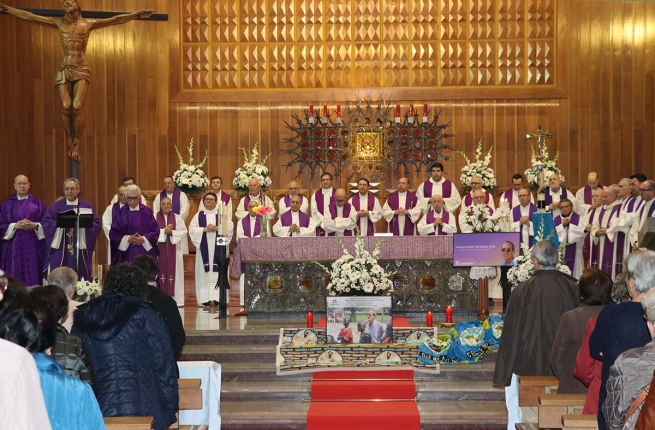 (ANS - Madrid) - The Shrine of Mary Help of Christians in Madrid was filled with faithful last Monday, March 4, to celebrate a Mass in suffrage of the Salesian missionary Fr Antonio César Fernández, assassinated during a terrorist attack in Burkina Faso last February 15th.

Hundreds of people, including a large number of religious from different congregations, joined the Eucharistic celebration. It was a sign of the affection that the whole Church has shown in the last weeks towards the Salesian Family. The Eucharist was presided over by the Provincial of the "Spain-Saint James Major" Province (SSM), Fr Juan Carlos Pérez Godoy, and concelebrated by the Episcopal Vicar for Consecrated Life, Father Elías Royón, SJ, and by the Episcopal Vicar of V Vicariate, Fr Juan Pedro Gutiérrez, as well as by several Salesian priests.

"César seems to me to have been a saint, not only for the way he died, but for his whole life," said Fr Pérez Godoy, confessing at the same time, at the beginning of the homily, that he had cried as soon as he learned of the news. The SSM Provincial recalled the circumstances in which Fr Antonio César Fernández was assassinated, and several similarities with Christ's death on the Cross: "It was a Friday, at 3:00 pm ... He was pierced three times, by three shots." He also emphasized the fact that the missionary had traveled by car, when he could have travelled by plane.

The life of Fr Antonio César Fernández was intimately bound to the African continent. The Salesian missionary was one of the founders of the Salesian presence in Togo, a country to which he was sent as part of the "Project Africa" ​​of the then Rector Major of the Salesians, Fr Egidio Viganò. "Father Antonio César's blood will make the seed of the Gospel fruitful on African soil, for the good of the Church, and especially for the most needy young people in Africa," assured Fr Pérez Godoy.

The Salesian Provincial also expressed "feelings of thanksgiving to the Lord for people like Antonio Cesar" who "encourage us to continue to live our vocation faithfully."

He concluded with an invocation: "May the Lord give us His light to accept these moments and His strength to live with the same ideals of Antonio César."