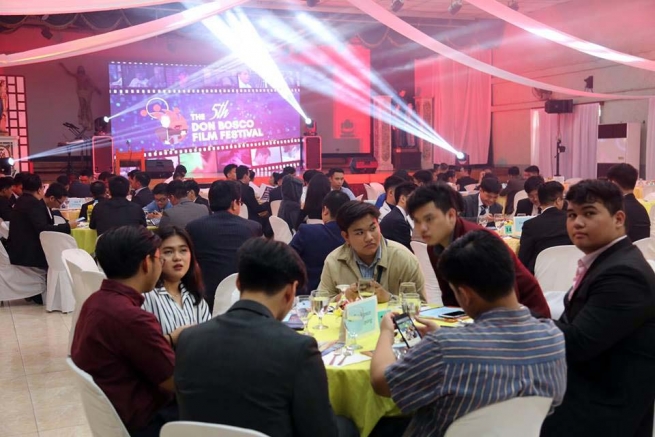 (ANS - Makati City) – Last February 23, dozens of young people and film enthusiasts participated in the awards ceremony of the fifth edition of the Don Bosco Film Festival (DBFF) promoted by the Salesian Province "St John Bosco" of the North Philippines. The event took place at the Joy Center of the Don Bosco Technical Institute in Makati City.

Emceed by Fr Juvelan Samia, SDB, and Deacon Jerome Quinto, SDB, both members of the FIN Province Commission for Social Communications, this year's edition saw the number of Salesian films increase even further with the first-time participation of the houses of Batulao, of the Salesian parish in Santa Rosa, Laguna, and of the "Don Bosco Academy" in Bacolor, Pampanga.

After the national anthem, there was the welcome of CS Delegate Fr Bernard Nolasco, and a musical-based prayer performed by the "Coro di Don Bosco" – an all-male choir of St. John Bosco Parish, Makati City, during the intermission. The Filipino director Kip Oebanda, a past pupil of Don Bosco and member of the DBFF Board of Judges, was the keynote speaker.

Mr. Oebanda urged the young Salesian students present to use their God-given talent and their passion for cinema to produce useful stories that can truly serve the good interest of society. "As a filmmaker," he said, "you have a great responsibility to use this tool to serve the genuine values of life."

After the screening of a short video that retraced the previous editions of the DBFF, the awards ceremony began in the respective categories, which included both technical and artistic prizes in the sections: short advertisement, documentaries and short films.

In addition, two special prizes were awarded for the work most voted by the public and for the film chosen by the local Salesian publisher.

Started in 2015, on the occasion of the Bicentenary of the birth of Don Bosco, the DBFF continues to grow year after year in consideration of the local society and sponsors. Currently, students from any institute (school, oratory, educational centre, vocational training centre...) of the Salesians, the Daughters of Mary Help of Christians and the Sisters of the Charity of Jesus from all over the country can participate.

This last edition, launched during the year that the Church of the Philippines dedicated in particular to clergy and consecrated persons, had as its theme the Gospel passage: "Come and See" (Jn 1:46) and challenged young people to tell true stories of religious who lived the Salesian charism and transmitted God's love to the neediest young people.

So the DBFF gets also to motivate young people to become observers and narrators of the reality that surrounds them.