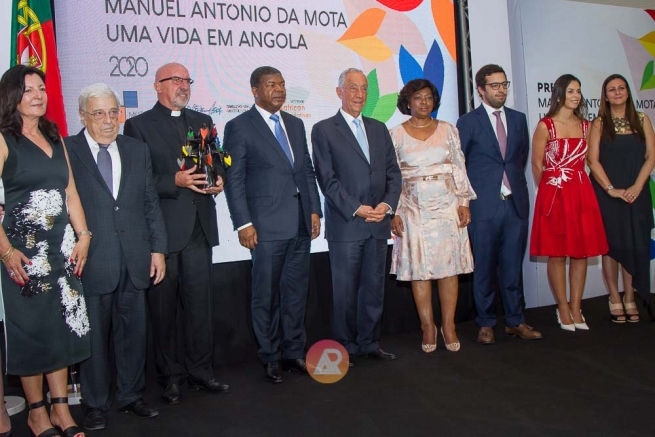 The "Manuel António da Mota" Foundation is an emanation of the Mota-Engil Group, a large Portuguese company active in the construction, energy and transport sectors and operating in 22 countries on 3 continents (Europe, Africa and America). The Foundation, founded in Portugal, aims to promote, develop and support social and cultural initiatives and thus represents an important tool of the Corporate Social Responsibility policy of the Mota-Engil Group.

In order to pay tribute to those institutions that distinguish themselves in health and education, last Friday an event took place at the Epic Sana hotel in Luanda during which the first edition of the "Manuel António da Mota - A life in Angola " prize was launched, which will take place in 2020. On this occasion, a special mention of the award has already been assigned, which the First Lady of Angola, Ms Ana Dias Lourenço, has consigned to Fr Manuel Ordoñez Roman, Vicar of the Salesian Vice Province of Angola.

In the motivation of the award, the representatives of the "Manuel António da Mota Foundation" recalled that the Salesians of Don Bosco began their activities in Angola in 1981 and explained that the prize was awarded because of their dedication to the cause of the most disadvantaged groups and the well-being of the Angolans.

The president of the Board of Directors of the Foundation then indicated that the recognition "Manuel António da Mota - A Life for Angola" will aim to honor the non-governmental philanthropic organizations of Angola, similar to what has been done for 10 years in Portugal; and explained that it was decided to establish the award in Angola, because that is the country where Mr. Manuel António da Mota started his business 73 years ago.

The ceremony was also attended by the Vice-President of the Republic of Angola, Bornito de Sous, several Angolan and Portuguese parliamentarians, ministers, prominent figures and businessmen, together with several members of the Manuel António da Mota Foundation and the Mota-Engil company.