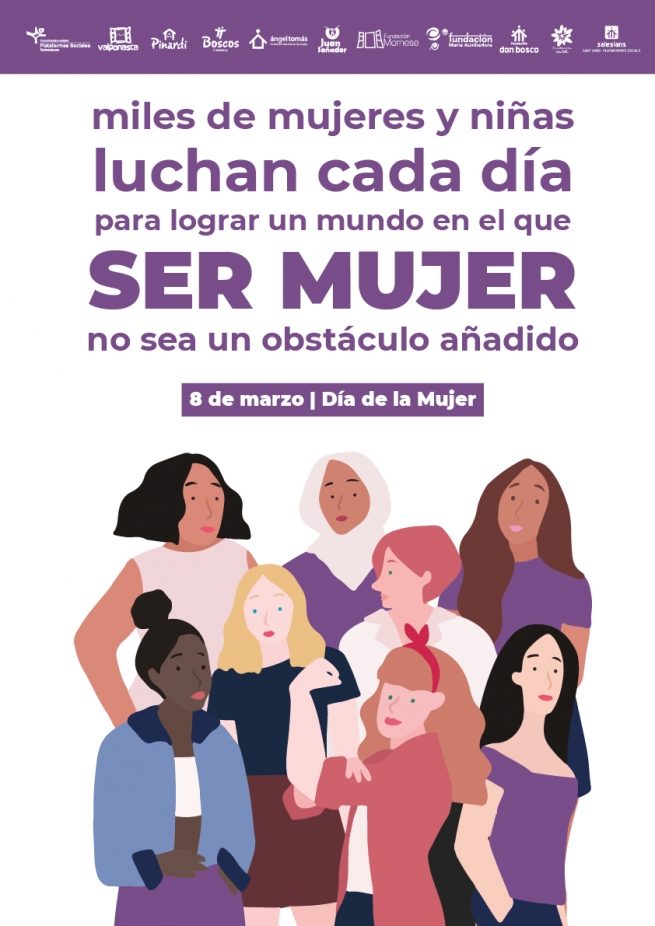 (ANS - Madrid) - On the occasion of International Women's Day, today March 8, the Salesian Social Platforms have joined together to claim the rights of girls and women who struggle every day to create a world in which being a woman is not a obstacle, and to denounce the inequalities, abuses and injustices that they suffer every day, especially those who are most at risk or vulnerability.

Since their creation, the Salesian Social Platforms have developed, among other initiatives, specific services for the integral development of girls, young women and women and in favor of equality: through literacy projects, formation and accompaniment, specific social and work integration for women, and reception programs for single-parent families and women victims of gender-based violence.

An example can be seen in the "La Mina" center of the Salesians in Barcelona-Sant Jordi, where programs are offered for mothers with young children, whose purpose is to support women in taking up their parental role adequately, through concrete resources that allow them to carry out work compatible with the growth and maturation of their children.

Other programs currently underway are:

#GritandoAlMundo, from the "Fundación Juan Soñador", an intervention project with teenagers and young people to promote gender equality.

#Aurrera, of the "Fundación Boscos", which aims to eliminate sexist stereotypes, prejudices and discriminatory behavior.

#XarxaLaFinestra, organized by the "Fundación Maria Auxiliadora", a network learning project that promotes gender equality and the social and work inclusion of women at risk and socially excluded.

In the Pinardi Federation, various activities are carried out to work with girls, young people and women.

And the "Fundación Don Bosco" of Cordoba, wishing to give visibility to groups of women at risk of exclusion, will celebrate a special event entitled "Educating to equality."

Through the social networks, the Salesian Social Platforms have launched a message for the emancipation of all women: #OrgullosaDeSerMujer (Proud to be a woman).

With this campaign they want to promote a change of mentality and collaborate in the transformation of social and political reality, promoting a culture of acceptance, respect, generosity and justice, maintaining the commitment to be a reference organization in the field of gender equality.