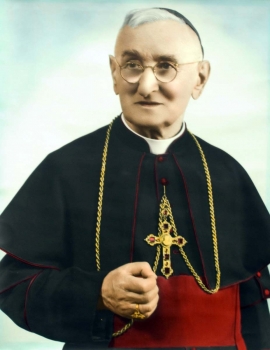 (ANS - Vatican City) - On 12 March 2019, during the Congress of Theological Consultors held at the Congregation for the Causes of Saints, a full positive opinion was given regarding the heroic exercise of virtues, the reputation of holiness and signs of the Servant of God Augusto Bertazzoni, archbishop of Potenza, born in Pegognana (Mantua) on 10 January 1876 and died in Potenza on 30 August 1972. The Servant of God attended the Salesian oratory in Turin and met Don Bosco, who had a great influence on his formation.

It is nice to remember that this fundamental passage of the Cause took place on March 12, the day of the death of Saint Luigi Orione who, with the young Augusto Bertazzoni, was a pupil of the oratory of Valdocco in Turin. Both were among the boys who in 1887 offered their lives for the salvation of Don Bosco; while for his part the Saint of the Young had prophesied that the young Augustus would become bishop.

Mons. Bertazzoni was a good Pastor and father of the poor, a true man of God, a man of faith and prayer, a tireless preacher of the Word of God, attentive to the spiritual needs of the faithful and even non-believers, for whom he spent his life to the very end, offering to God, for the good of the Churches that he had led as a bishop, the sufferings that led to his death.

He was a father to the victims of war and to the Jews confined to Basilicata, a farsighted educator of the young, and he spent his time so that the priests of his diocese, together with men and women religious,  dedicated themselves to the formation of young people, both in schools as in “Catholic Action”; he would recommend to all of them to have a "spirit of paternity" for the new generations.

After this step, the next takes place in the Ordinary Session of Cardinals and Bishops, after which the Supreme Pontiff authorizes the promulgation of the decree of Venerability.