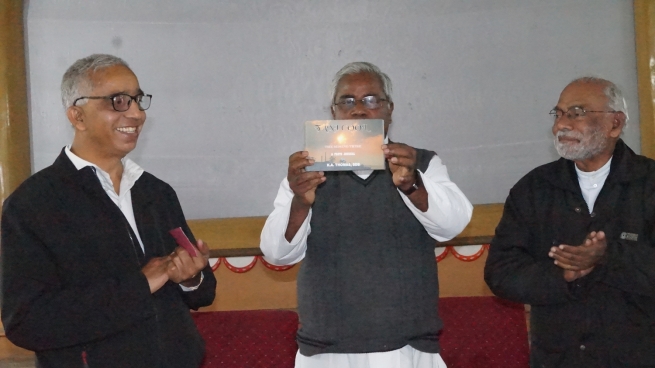 (ANS – Jorhat) – The latest book by K. A. Thomas, sdb, called “Tani Cool”, was released on 4th March 2019, by Rev. Jose Kuruvachira, the Provincial Superior of Don Bosco organizations in Assam, Arunachal Pradesh, Nagaland and Manipur. The book was released at Don Bosco, Baghchung, in the presence of a large number of educationists and social workers from Golaghat, Jorhat, Sivasagar, Dibrugarh and Tinsukia Districts of Assam.

“Tani Cool” is a random collection of photographs taken by the author, dating from 2000 to 2015. The colourful photographs depict their entire life and culture of the Mising people spread out in the rural situations of 11 districts of Assam and 3 districts of Arunachal Pradesh. The book describes pictorially 46 topics about the tribe.

The word Tani in the title refers to the nomenclature of the tribe that once lived in the present day Arunachal Pradesh, and belonged to the Tani group of tribes. Misings are a cool people, who never had an army or a king. They were called upon by the British rulers to intermediate between the warring tribes living in the hills and plains of the region.

Fr K.A. Thomas, SDB, a member of “Don Bosco International”, is the founder director of Institution for Culture And Rural Development (I-CARD), based at Jorhat, and is an Ashoka Fellow since 2002. Although hailing from Kerala, he has mastered the Assamese language, having obtained a bachelor’s degree in Assamese from Guwahati University way back in 1987.