Pakistan - The memory of Akash Bashir, Salesian Past Pupil, 4 years after his death 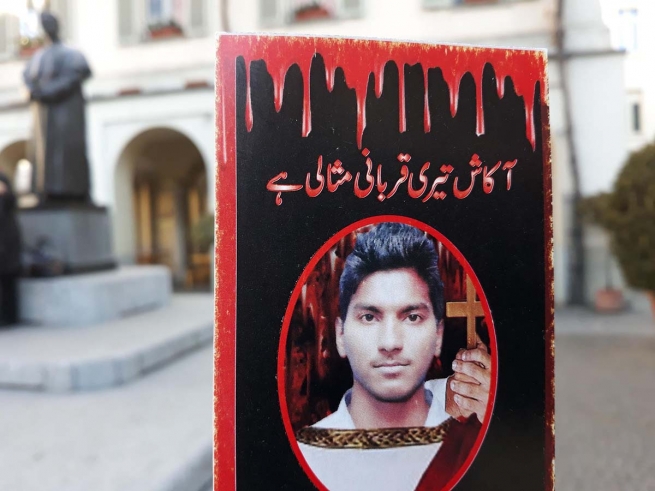 (ANS - Lahore) - Four years have passed since that 15 March 2015, the day when the young Akash Bashir, Salesian Past Pupil, sacrificed himself to prevent a suicide bomber from provoking a massacre in the church of St John in Youhannabad, the Christian neighourhood of Lahore, Pakistan.

Akash Bashir was 18 years old, had studied at the Don Bosco Technical Institute in Lahore and had become a security volunteer. That tragic March 15, like every Sunday, he was on duty. He was specifically charged with overseeing security at the entrance to the church of St John.

While on duty, he received news that the Church of Christ, an Anglican church located 500 meters away, had been attacked by several armed men. Akash tried to secure the area in front of the church of St John, when he saw a man running towards the building - a terrorist, intent on more carnage.

Akash faced him, trying to block him. The man threatened Akash, declaring he had a bomb with him, but the young man did not let himself be intimidated. He hugged the terrorist to keep him from entering the church. The bomber blew himself up, causing about twenty deaths, including Akash himself. The victims would have been many more, had the Salesian Past Pupil not sacrificed his life.

"The history of the Church is strongly marked by many women and by many men who with their faith, with their charity and with their lives have been like lighthouses that have illuminated and continue to illuminate many generations over time," writes the Rector Major, Fr Ángel Fernández Artime, in the Strenna 2019.

For the Christians of Youhannabad, Akash, with his great faith, is exactly this: a lighthouse, an example to follow.

On his tomb, as Fr Francis Gulzar, pastor of the church of St John, has said, many go to pray and ask for intercession. His courageous act still inspires Pakistan's Catholics today in their daily journey and motivates them not to be discouraged by the many challenges they still face.

For this reason, Fr Francis Gulzar, who is also Vicar General of the Archdiocese of Lahore, in January 2017, sent a letter to the archbishop, Msgr. Francis Shaw, "to formally request to start the official procedure to declare Akash Bashir Martyr, to honor his sacrifice for his community in the parish of Yauhanabad."

"The Christian community of Youhanabad is proud of its young hero, Akash Bashir, reads the letter, "and asks His Excellency to transmit our request to the Holy Father and to the relevant Congregation for the cause of martyrdom."