Spain - Remembering Fr Antonio César: "If in his life he was a great apostle, in his death he was even more so" 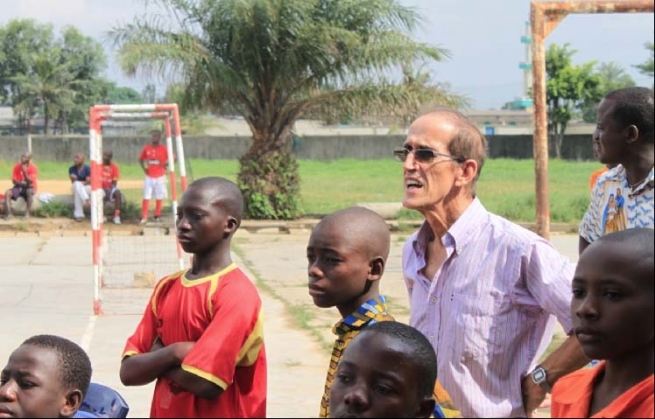 (ANS - Seville) - The Salesian Province "Spain-Mary Help of Christians" has created a special e-mail address - This email address is being protected from spambots. You need JavaScript enabled to view it. - in order to gather and convey news, testimonies and experiences related to Salesian missionary Fr Antonio César Fernández, killed last February 15 in Burkina Faso.

"The establishment of this address is motivated by the fact that many people are sending a large number of letters, messages on WhatsApp or comments because of what has happened, and we want to collect all this news. Furthermore, we were also motivated by the request of the Apostolic Nuncio to prepare a dossier with written, graphic and audiovisual testimonials about our brother Antonio César," explains Fr Alejandro Guevara, Delegate for the Salesian Family of the SMX Province, who also accompanied the family of the Salesian during the funeral celebrated in Togo and Pozoblanco, the birthplace of Fr Fernández.

The funeral in Spain, celebrated last February 24, was presided over by the bishop of Cordoba, Msgr. Demetrio Fernández González, who shared words of consolation for the citizenship and recalled a person who from a very early age had a clear vocation to serve those most in need, why he went to Togo to found the first Salesian presence in that country. "His death made us think. He did a great deal of good for the Salesian Family and for all those who received his testimony. If in his life he was a great apostle, in his death he was even more so. It was a final gift, after a commitment sustained throughout his life. For this he became a Salesian and that is why he asked to go to Africa where he was able to accompany young people at risk. He would not have been there if he had not chosen to live his daily life as a missionary," the prelate said during the event.

Mons. Miguel Ángel Olaverri, Salesian bishop of the diocese of Pointe-Noire, in the Republic of the Congo, shared some of the experiences lived with Fr Antonio César during the period of the foundation of the Salesian presence in Togo. "It was a moment of communion, as is also reflected in this celebration in which four Salesian Provincials are present and over 1,300 Salesians are represented in Africa." He then referred to the clamor caused by the death of Fr Fernández in Lomé, in Togo, where the figure of Caesar is highlighted as that of a martyr who will reach the altars. "After Pope Francis' invitation to holiness, I was pleased to hear the expression 'a saint is buried today.' We must identify the saints who live with us today and who accompany us," he added.

For his part, in a letter addressed to the Salesian Family, the Rector Major defined the Salesian killed as "a good man and a man of God", who spent his life doing good, especially in Africa.