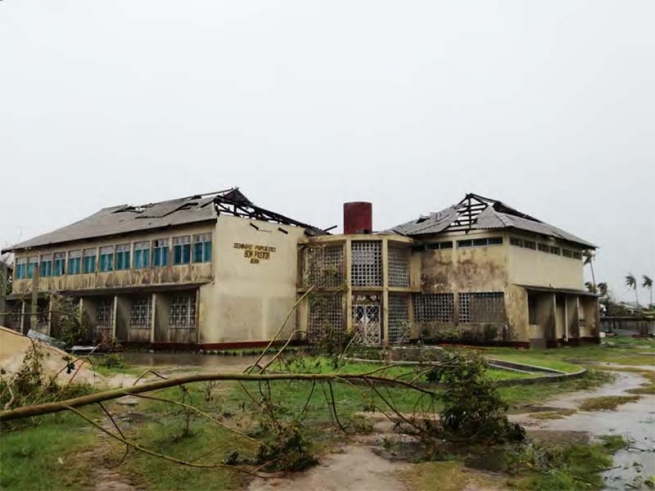 (ANS - Beira) - After weeks of torrential rains and floods, a large area between Mozambique, Zimbabwe and Malawi has been hit by Cyclone Idai. Although the official figures are still being updated, the situation on the ground is defined as "terrifying": over 200 victims already registered, but the estimates speak of more than 1,000.

Of the three countries affected by the fury of the cyclone, Mozambique is probably the hardest struck. The communities of the Salesians and the Daughters of Mary Help of Christians in Mozambique, despite not having homes in the tragedy's epicenter, are mobilizing to assist the victims by providing food, clothing and basic necessities, as well as their prayers.

In the coastal city of Beira, 90% of the buildings have been destroyed or damaged, while most of the population is displaced. Also severely damaged are sections of the hospital and the city's most important access roads. The port is only partially operational, but still allows for the arrival of aid by sea. Other central provinces of Manica, Zambezia and Tete have also been affected by floods, as well as part of the northern part of Niassa. Many of the inland villages have remained isolated and still inaccessible to relief efforts.

It was President Filipe Nyusi, who flew over Beira and the Manica and Sofala provinces by helicopter, to declare to Radio Mozambique, "it is a disaster of great proportions" and to testify that "entire villages have disappeared, communities are isolated and bodies float on the waters.”

The archbishop of Beira, Msgr. Claudio Dalla Zuanna, issued a statement in which he testified to the seriousness of the situation and announced the preparation of a relief program to help the population: "As a diocesan church, through parishes and Caritas, we are activating an emergency plan to meet the most urgent needs.”

Even in Zimbabwe the situation is serious: there are at least one hundred dead and over 200 missing. The damage to homes and infrastructure are considerable and the first estimates speak of over 900 buildings destroyed. The Chimanimani region is among the most affected, many areas are inaccessible even to helicopters, making rescue operations very difficult.

In central and southern Malawi, the cyclone and floods have also caused massive damage with dozens of deaths, more than 500 injured and over 140,000 displaced people in 13 districts. The areas of Chikwawa, Zomba, Balaka, Machinga, Dedza and Ntcheu are the most affected.