Mozambique - Rector Major: "Feel the closeness of my prayer and the presence of Our Lady Help of Christians who accompanies you" 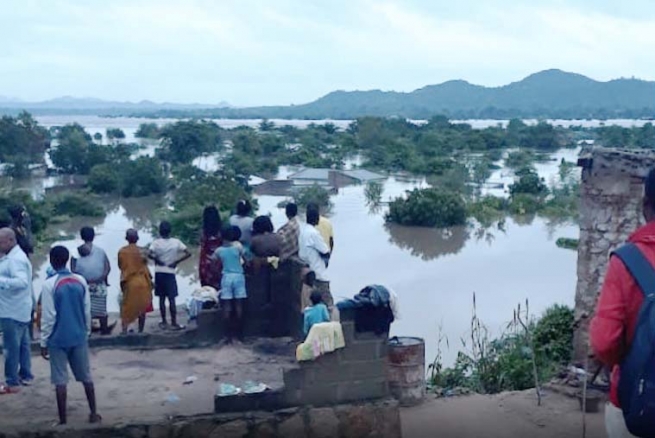 (ANS - Beira) - Heartbreaking images of death and destruction have been arriving from south-eastern Africa just a few hours after the passage of the "Idai" cyclone. According to the first estimates, around 2.6 million people have been affected by the natural disaster, which could become one of the "worst climate-related disasters ever seen in the southern hemisphere," UN officials said on Tuesday. As usual, the Salesians are close to the people suffering: "the missionaries are mobilizing to help the victims with food, clothing and basic necessities," said the Spanish Salesians.

The Salesians in Spain received information through Ángel Miranda, who has worked with the Salesians of that country for several years. "The Salesians in Mozambique have not suffered any damage to their homes and can therefore mobilize themselves to help the victims."

The cyclone in Mozambique has caused much chaos, especially in the city of Beira, on the central coast of Mozambique. "The roads are broken and products such as fuel and drinking water are becoming rare," explains Fr Francisco Pescador, SDB, from Mozambique.

The communities where the Salesians reside - Maputo, Moamba, Inharrime, Matundo and Moatize - were not seriously affected. "We are in permanent contact with the dioceses affected and we will help the suffering population as much as possible," explain the religious.

They add: "The cyclone in Mozambique took away the houses that were built on the river bed or on the nearby shores. Furthermore, the floods were sudden and nocturnal. There was no time to react."

The situation in Zimbabwe is also very serious, due to the large number of deaths. The office of the International Rescue Committee (ICR) in the country has declared that "following cyclone Idai a new fear is awakening: that of the outbreak of epidemics and contagion of cholera and malaria due to unhealthy conditions."

The Chimanimani region is among the most affected, with many areas inaccessible even to helicopters, which makes rescue operations difficult.

To the people suffering from grief, the Holy Father expressed his closeness, stating: "In these days, great floods have sown grief and devastation in various regions of Mozambique, Zimbabwe and Malawi. To these dear people I express my pain and my closeness. I entrust the many victims and their families to the mercy of God and I implore comfort and support for those affected by this calamity."

The Rector Major, Fr Ángel Fernández Artime, also expressed his solidarity: "Let us thank God who always accompanies us in times of difficulty. I invite you not to be discouraged at this time and to put all your energies at the service of the people who need us most. Feel the closeness of my prayer and the presence of Our Lady Help of Christians who accompanies you."