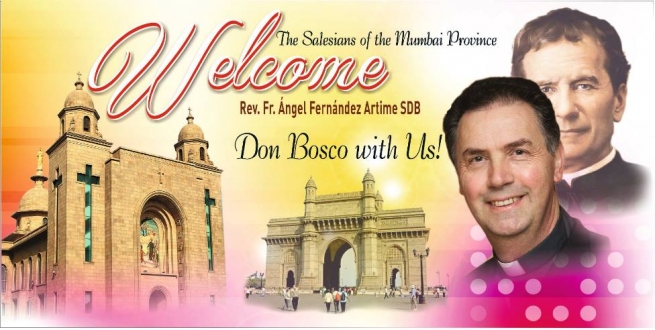 (ANS - Rome) - From 23 to 28 March, the Rector Major, Fr Ángel Fernández Artime, will be in India, accompanied by Fr Horacio López, Secretary of the Rector Major, for the Animation Visit to the India-Mumbai Province (INB).

The X Successor of Don Bosco arrives in India tomorrow night, 22 March, but his commitments begin the next morning.

The first official appointment shall be the meeting with the Provincial Council, to be held in the provincial seat of Matunga in the early morning.

In the afternoon of the 23rd, two meetings have been scheduled: one with the Daughters of Mary Help of Christians (FMA), the second with the Salesians, the FMA and young people, who will welcome the Rector Major in the Shrine "Our Lady of Don Bosco."

On Sunday, March 24, Fr Á.F. Artime will be in Pune. In the morning he will animate a conference for the Salesians; in the afternoon, he travels to Yervada. Here, after a brief refreshment with the Salesian Family, he will preside over the Sunday Eucharist at the parish of the Sacred Heart.

On Monday, March 25th, the Successor of Don Bosco meets the young of the Nashik novitiate and then shares lunch with them at the student residence of Divyadaan.

In the evening, he will return to Mumbai and from here, on the morning of Tuesday 26 March, he will leave again, this time towards Baroda.

There shall be many young people waiting for the Rector Major in Baroda who will meet him during the event scheduled for the afternoon. Then the Successor of Don Bosco celebrates Mass at the Don Bosco Parish.

On Wednesday 27, he is scheduled to return to Mumbai for the last day of the Animation Visit. On this day, Fr Artime will go to the community of Andheri where he will participate in the celebrations scheduled for the 50th anniversary of the “St Domenico Savio” school.

Before leaving for Rome, the Rector Major will then join the Salesian Family and the staff of the "Domenico Savio" school for lunch.

After the Visit to India by the Rector Major in November 2017, expectation are high for his return to India. Salesians, FMA and many young people from the Province are now waiting to receive his encouragement again as the Successor of Don Bosco.