Sudan – “What a joy to see all the computers turned on!” 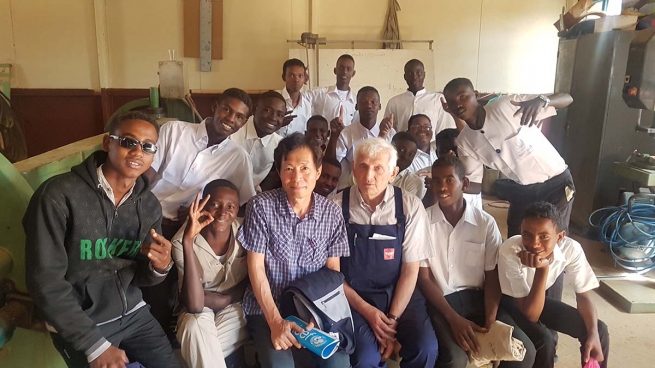 (ANS – El Obeid) – As has been the case in other years, past pupils from the Don Bosco Centre in Seoul have rallied to help Salesian vocational centres elsewhere, this time in Khartoum and El Obeid, Sudan. Working closely with Mr Lin Chanwoo, a past pupil from Batch 7, Br Marino Bois, SDB, spent 7 weeks in Sudan at these vocational training centres, repairing machines, helping the teacher find an easy way to make tools.

They opened a classroom sponsored by the past pupils from the Seoul Don Bosco Centre, with 15 computers to teach CAD (Computer-Aided Design). Br Bois had to give lessons to the teachers and prepare them to teach the students.

A Korean woman sponsored a classroom with 20 computers to teach the boys how to use the keyboard to type in English and Arabic, and the basic functions of the most commonly used programs. “What a joy it was to see all the computers turned on together!” said Br Bois.

The missionary activity, supported by the Salesian past pupils, has grown each year, and as a result, last year the Salesians were able to provide two new lathes. These were the only two new machines they had received since their school began. The school was founded by Salesians Father Vincenzo Donati, and the Comino Brothers, Jim and Andrew. Due to lack of funds they could only purchase second-hand machines. As time passed, the old machines got older and developed many problems. So every bit of help from outside was and is really welcome!

On the way back, the group stopped over for one week at the St Joseph's vocational training centre in Khartoum. “I was there in 1991–1992, and there too the school only had a small budget, and we could only buy second-hand machines. After we recruited 20 young people, I taught them for four months, then Br Jim Comino took my place. In collaboration with Fr Vincenzo Donati, he developed the school until it was taking in 300 students. They also had a request from the local police to also teach the boys from the prison. That very morning, two military trucks arrived at the school full of boys and policeman as well who were willing to learn the skills offered in the special courses prepared for them,” said Br Bois.

Recently, the school situation became difficult. Most of the teachers had been formed in the school, many of them recruited from the refugee camps, and all from what is now South Sudan. When the South declared independence, the majority wanted to return to their homeland. Recruiting new teachers with the know-how to teach practical subjects was not an easy problem and is not completely solved.

A young Indian missionary is working hard to bring the school back to the level of former times, starting with the welding section, where almost all the machines, after 25 years, are almost unusable.

“We will try to see what we can do since we have still some of our budget left over. If we are called upon again and if it is the will of God, we are ready...” Br Bois concludes.