Slovakia – Lenten Curtain in the church of St. John Bosco 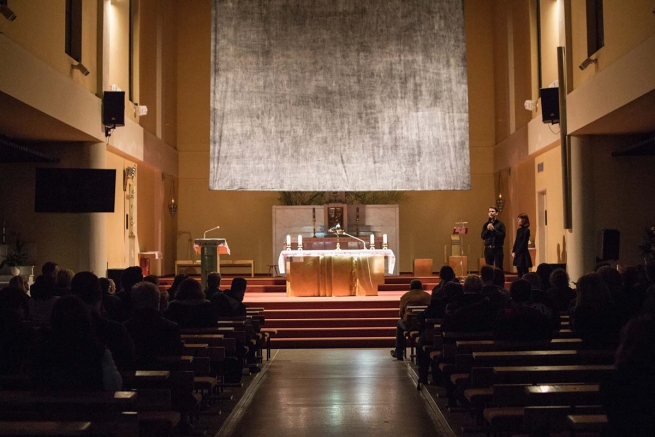 (ANS – Bratislava) – This year, the Salesian parish and church of St. John Bosco in Trnávka, Bratislava, celebrates the 80th anniversary of its consecration. This is one of the first sites where the Slovak sons of Don Bosco have come. Firstly, it was an area of poor worker barracks behind the borders of the town. “When the Salesians first came in 1938, they wanted to spread faith and culture to this periphery of Bratislava. In 1938, the first Salesians were not welcomed by the local people who threw stones at them, but the Salesians didn't give up… Finally the church was sanctified on June 4, 1939,” said director of the Salesian community, Fr Tibor Reimer, SDB.

During Lent 2019, thanks to this anniversary, a large textile banner has been installed above the altar in the area of the presbytery. This temporary art intervention helps to discover the power, beauty and a specific character of this functionalist church space.

This temporary installation has been put for 40 days - from Ash Wednesday to Holy Saturday (6 March – 20 April 2019). The author of the the Lenten curtain is Klára Štefanovičová, a student of the Academy of Fine Arts in Bratislava, who is studying Free Printmaking in university.

We can find tradition of Lenten curtains in the Middle Ages, where a main part of the presbytery or altars were covered in the Christian temples during Lent.

“It is an invitation for a visitor who is in this church space to offer the possibility of a radical fasting of the eyes,” says the project curator, also a Salesian parishioner, Michal Žák.

The installation will be accompanied by cultural parish events. These events are called Lenten Wednesdays which consist of Holy Mass at 6 PM with the opportunity for the Sacrament of Reconciliation, followed by moderated cultural and spiritual evening at 6:45. During Lenten Wednesdays, visitors can hear presentations of speakers such as historians, architects, scenographers and theologians. All evenings are accompanied by different music groups and styles.