India - The Rector Major: "Imagine for a moment if the Salesian Family did not exist ..." 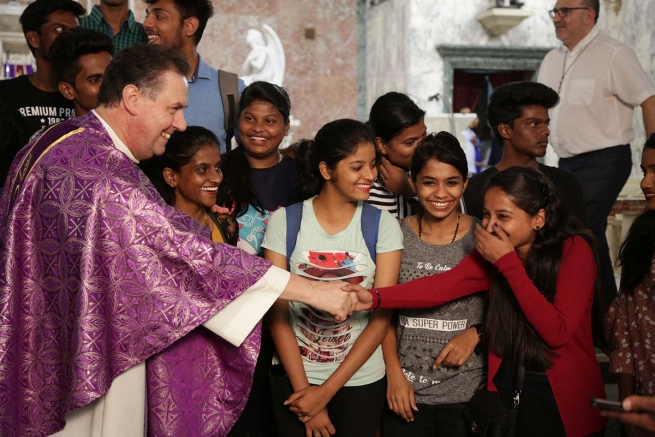 (ANS – Mumbai) – Mumbai and Samaria have little in common. One, a small region that formed ancient Israel, and the other over 4000 kilometers away is a bustling metropolis in Western India drawing millions of people in search of a better life. Rector Major Angel Fernandez Artime, the 10th successor of Don Bosco, during his Holy Mass at the Shrine of Don Bosco's Madonna, Mumbai, on March 23, drew inspiration from the life-changing experience of a Samaritan woman who met Jesus at a well.

Hundreds of laity, including the Salesian family, youth from Salesian institutions, confreres, and the faithful assembled to listen to Father Artime's message, the crux of which focused on Jesus' loving mercy and refusal to condemn the woman despite perceived infirmities.

Father Artime asked the congregation, 'Would you give Jesus water?' To which the youth present, answered, 'Yes.'  In his response, he added, ''We all finally need to meet Jesus and once we meet Jesus we have a transformation.''

He then urged the faithful to be witnesses to the Gospel values, ''Do not fear because Christ is always going to be with you,'' he said, adding, ''Like the women at the well, many a time our lives are not the best, we may not live our lives properly but when we meet Christ we all change.''

Father Artime also underlined the importance of Mother Mary in the Church, saying that she is ''always partnering'' with the faithful throughout their lives to help carry the burden. A special youth choir added a melodious touch to the service, which ended with a felicitation ceremony, a Spanish dance, singing of the Salesian youth movement anthem, and the release of Father Elias Dias' book entitled 'To Don Bosco with Love: History, Pedagogy, Spirituality'.

Addressing youth at the Don Bosco School quadrangle, the Rector Major said, ''Imagine if there wasn't a Salesian family in the world, imagine if there weren't 100,000 youngsters in the Salesian family. Imagine for a minute if this was to disappear. It would be a great tragedy for all the youngsters of the world and it would be a great emptiness in our Church. I am not saying this as a matter of pride, but so that we can be more conscious that we should give our very best for our youngsters.''

The Provincial of the Mumbai province, Father Godfrey D'Souza, and Vice-Provincial Father Savio Silveira were present at the Mumbai International airport to welcome the Rector Major at 1 am on March 23. First on Father Artime's agenda was a meeting with Father D'Souza and his team of provincial councillors from 9:30 am to 1 pm, getting feedback on various issues pertaining to the province of Saint Francis Xavier.

The Rector Major made it clear at the onset that the purpose of the meeting was not to conduct an external audit but a fraternal sharing with the provincial council and an exchange of ideas. He gave the team pointers on how to be transparent in all financial matters and dealings.

He then met Sister Ritha Dora Thomas, the Provincial of the Salesian Sisters of the Province of Mumbai, and over 50 Daughters of Mary Help of Christians (FMA) at 4 pm at Auxillium Convent, Wadala. ''Live your consecrated lives, your Salesian charism. You need to be a witness in life as that's what the youth look at. Work for the poor and abandoned,'' he said.

Sister Thomas reflecting on Father Artime visit said, ''The Rector Major's visit in person to the FMA Mumbai province is an unforgettable and inspiring experience for us. His message to us to live our Salesian consecrated life with joy and holiness will be a precious gift we can give our young people today.''

Father Artime also made some time in the day, to interact with youngsters of the Don Bosco Provincial House Oratory. Greeting them with high five's, the Rector Major's presence was an endearing reminder of Don Bosco among us, as children ran, jumped and played.

Yesterday, Sunday, March 24, the X Successor of Don Bosco went to Pune, where he met with all the Salesians of INB to listen to their questions and deliver his instructions. Then, in the afternoon, dressed in the clothes reserved for illustrious guests, the Rector Major, together with his Secretary, Fr Horacio López, went to the “Sacred Heart” parish in Yerwada, where he presided over the Sunday Eucharist, followed by a moment of fraternal agape with the Salesian Family.