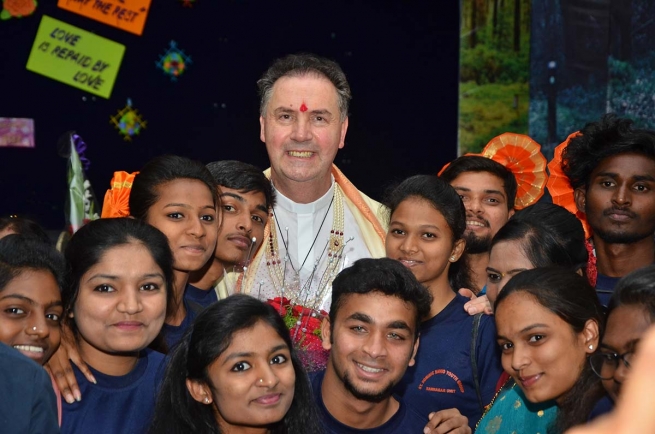 (ANS - Pune) – “This is a once in a lifetime experience,” said one of the young Salesians upon hearing of the visit of the Salesian Rector Major to the Province of Mumbai. There was intense excitement exuding from the campus of Koregaon Park, Pune as it prepared itself to welcome the 10th Successor of Don Bosco, Fr Angel Fernandez Artime.

For a good number of young Salesians this was the first time they had seen and personally encountered the Rector Major. Father Artime was welcomed by the young brothers on March 24 in Pune.

The Rector Major upon reaching Pune – on day two of his trip in India –addressed all the Salesians who had gathered and shared with them his personal reflections about the state of the Congregation in the world as well as in the Mumbai province. He warned the confreres to beware of the major temptations of clericalism and thirst for power. He expressed his desire that the Congregation always remain faithful to the charism of Don Bosco and to the Constitutions.

Then he answered some questions with regards to poverty and how we ought to understand poverty today. Father Á.F. Artime made it clear that one of the most fundamental forms of poverty is the lack of human dignity that exists in many societies. He pointed out that Salesian educational interventions must address this pressing issue before moving on to helping young people equip themselves for a better future.

A final question that arose was with regards to the missionary dimension. The Rector Major cleared that the missions are a fundamental dimension of the Salesian vocation. He encouraged the young Salesians to seriously consider the call to the missions and to opt generously should they feel called.

In the afternoon he received a rousing welcome at the Sacred Heart Parish and Don Bosco High School and Junior College. He got a glimpse of the local culture as he rode to the parish on a chariot; a high tea followed.

The Rector Major was then led in procession with a prayer dance by the Don Bosco Junior College students to celebrate the Holy Eucharist for over 1500 faithful who had gathered.

After the Mass a cultural programme followed. The Rector Major was then felicitated by the different units of the Salesian family and then he released a book, “Salesian Contribution to the Ahmednagar Mission”, a theological, historical, and pastoral study authored by Rector and Parish Priest of Sacred Heart Parish, Father Michael Bansode.

He ended his Pune sojourn with the traditional Salesian “Good Night”.