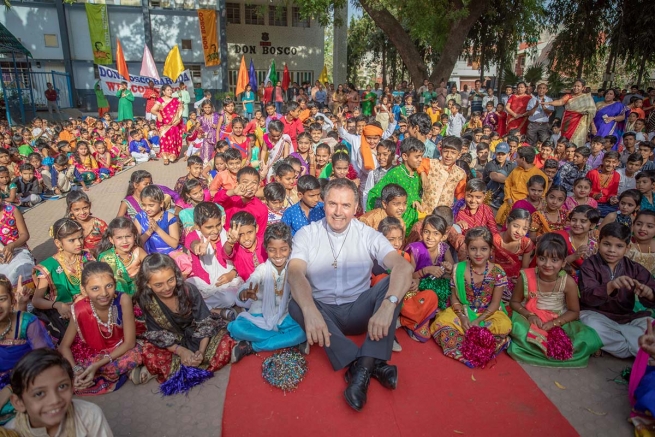 (ANS - Mumbai) - Embraces, photos, joyful celebrations, large gatherings, messages of encouragement and guidance in the face of the many challenges that await those who want to commit themselves to youth ... All this is flavoring the Rector Major's visit to the India-Mumbai Province (INB) which ends today, March 27th. From this evening, in fact, the X Successor of Don Bosco starts upon a new stage at the India-Panjim Province.

On Monday 25 March, the fifth anniversary of his election as Rector Major, Fr Ángel Fernández Artime spent his time to meet the novices of the Province at the Nashik center. It was a precious time spent among the young people in formation and towards the guidance of the whole Congregation, time during which the Rector Major encouraged the novices to discern well their Salesian vocation, clarifying that the call is to be primarily Salesians, and not just priests.

Subsequently, Fr Á.F. Artime also wanted to meet the lay personnel who collaborate in the Salesian mission within the provincial offices, having lunch with them.

In the afternoon he met with the members of the Salesian Family, to whom he said that the laity are important because they arrive where the Salesians cannot go and so bring the charism of Don Bosco to the world.

In the evening he then reached the "Saint Joseph" house in Wadala; there he attended the show organized in his honor by the school community and then presided over the Eucharist.

Yesterday morning, Tuesday 26, the Successor of Don Bosco, accompanied by his Secretary, Fr Horacio López, and by the INB Provincial, Fr Godfrey D’Souza, flew to Vadodara in the State of Gujarat. Welcomed at the airport by a large crowd of members of the Salesian Family, he then headed towards the Salesian house where a meeting was scheduled with all the Salesians of the Province. In the afternoon, he attended a gathering with the children of all the INB Salesian centers - a very festive gathering, with young people dressed in traditional clothes.

Of note, before reaching the center, Fr Á.F. Artime wanted to visit a house of Carmelite nuns, asking them for prayers and offering them the blessing of Mary Help of Christians.

On the morning of today, March 27th, before leaving the INB Province, the Successor of Don Bosco found time to reach the Salesian school in Andheri to participate in the celebration for the 50th anniversary of the institute's existence. On this occasion he also met and praised the members of the "Prafulta" psychological counseling service.