Brazil – Fr Filiberto González: "Communication requires coherence and testimony in order to be with young people in the digital environment" 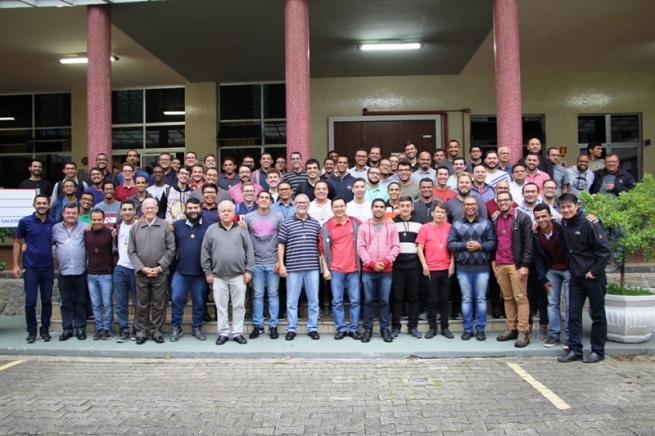 (ANS - Sao Paulo) - On 22 and 23 March, the Salesian Province of "Mary Help of Christians" of Brazil-Sao Paulo received the visit of the General Councilor for Social Communications, Fr Filiberto González Plasencia, who met the young Salesians in formation, the local communications teams and the Salesians who make up the National Commission for Mission Animation.

Fr González arrived in Sao Paulo in the afternoon of Friday 22 March, after taking part in the meetings of the Salesian Communication Network of Brazil and the National Communications Commission (CONAC), which brings together the Provincial Delegates for Communications of the country's six Salesian Provinces.

In the meeting with the Salesians in formation, the General Councilor repeated to them the challenge he had given to the Delegates of Communication, adapting the theme of the next General Chapter: "Which or what kind of Salesians for today's youth in the field of communication?" According to Fr González, the way of doing Pastoral Care implies being present, not only in playgrounds, courtyards, and conventional forms, but also in being current in new languages ​​and new forms of learning: "We cannot do pastoral work as we have always done, because today's youth, adolescents and children have another way of perceiving reality, life, another way of thinking, another way of learning," he explained.

He then spoke of the importance of changing the mentality of the Salesians to be present in the digital environment, using the different possibilities responsibly and in a proactive way, "making oneself present among the young with coherence and life witness."

Finally, he was able to learn about the experience of "A.COR.DAR", a pastoral communication project on social media with a focus on audiovisuals produced by theology students.

On the following day, the General Councilor met the local communication teams of the Province and the representatives of various Salesian centers. He described the importance of the five senses for a good relationship between people, especially one's gaze, listening and touch, along with the importance of body language.

"The Salesians," he said, "in Communication follow a principle that comes from the Preventive System of Don Bosco and whose center is loving kindness. At the center of Salesian communication there is affection and authentic relationship. The person is at the center, the media are means."

Finally, Fr González also spoke at the meeting of the National Commission for Mission Animation, which evaluated the common projects fulfilled in recent months and planned the next initiatives of the commission, including the elaboration of the Inter-Provincial Missionary Animation Project.