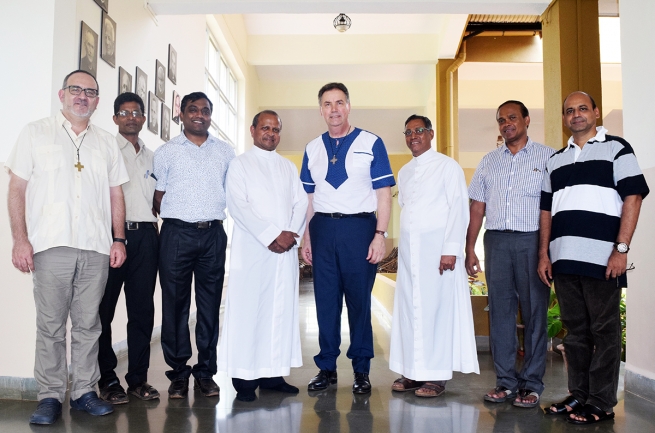 (ANS – Panaji) – Rector Major Father Ángel Fernández Artime arrived to the Salesian province of Panjim at 10.20 pm on 27 March 2019. He was welcomed by the Provincial, Father Felix Fernandes, Vice Provincial, Father Avil Rodrigues, Salesians and the Salesian Family members at Dabolim airport, Goa. The 10th Successor of Don Bosco is visiting the province of Panjim for the first time. He will return to Rome on April 1, 2019.

Fr Á.F. Artime is coming to meet his Salesians, the Salesian Family, the youth, the parents of the Salesians, the benefactors and the beneficiaries of the Salesian works. Father Avin Carvalho, the chief organizer of the Rector Major's visit says that he is happy to have the successor of Don Bosco in the province. He wishes that “his spirit rubs on to each one of us”. Fr Fernandes is also of the same opinion when he said that he is “extremely happy that the representative of Don Bosco has visited the province. It is a moment of grace and the revival of the Salesian Charism in our province,” he said.

“For us it is a moment of celebration around the Successor of Don Bosco. He has called each of us to be holy,” said Fr Carvalho. F Ralin de Souza will be Rector Major's official translator.

The Rector Major will dedicate many hours of his stay to reflect on the various activities of the spiritual Sons of Don Bosco in the Province. The first activity, scheduled this morning, March 28, is not by chance the meeting with the Provincial Council; in the afternoon, he meets with the Directors and the Officers of the various provincial services.

On tomorrow's schedule, Friday 29, a visit to the "Don Bosco" Institute of Panjim and dialogue with students and professors; a moment of prayer at the local shrine; the gathering with all the Salesians of the Province; lunch with guests, parents and benefactors of the Salesians; and, to conclude, a moment of cordiality with the Daughters of Mary Help of Christians.

Saturday 30 will be marked by the blessing of a new Salesian house, the meeting with the Salesian youth, a press conference and a solemn Mass, and finally dinner with the archbishop of Goa and Daman, Msgr. Filipe Neri Ferrao, and the bishop of Sindhudurg, Msgr. Alwyn Barreto.

Before leaving for Rome on the morning of Monday 1 April, the Rector Major will still have the opportunity to celebrate Mass in the sanctuary that houses the relics of the Patron of the Missions, St. Francis Xavier, in the ancient part of Goa, and to learn about the Salesian work with young people at risk, in the house of Paliem.

Salesians came to India in 1906 and started their first institution at Thanjavur in Tamil Nadu. The first institution in Goa was opened at Panjim in 1946. Fr Vincent Scuderi and Fr Joseph Carreno were the pioneers of the place. They first started the Oratory of Don Bosco where the youth would play and pray. Soon Carpentry was added, followed by the primary school, the tailoring classes, the English medium school with 36 students and the four classes of the Portuguese school, thus the humble beginnings of the work of Don Bosco in Goa. With their printing press, the Salesians published the monthly magazine, “Salesian Oratory” and the “Aitarachem Vachop”, a weekly in Konkani. Fr McGlinchey aired a religious program named “Hora Catolica” on All India Radio.

The Province of Panjim covers the Konkan region from Ratnagiri to Mangalore, that includes four district of Maharashtra, the whole of Goa and eight districts of Karnataka.

Today the Salesians have 10 houses in Goa, 3 in Sindhudurg (Maharashtra) and 6 in Karnataka. Educating youth towards a better future and proclaiming the values of Jesus to all, have been their most important goals. Salesians have 9 schools, 3 Higher Secondaries, 3 National Institute of Open Schooling (NIOS), a Night School, a Vocational Training institute, a Technical School and a Public Library. Recently, they have also entered into the Higher Education with Don Bosco College in Panjim, College of Engineering at Fatorda and a College of Agriculture at Sulcorna.

Salesians look after the street boys, the youth at risk at Paliem-Ucassaim, have boarding houses for children and a Hostel for men. They are also engaged in social work. They empower women through Self Help Groups and various developmental works through Konkan Development Office at Odxel.

The Salesian Family in the province of Panjim includes four groups started by Don Bosco himself: the Salesians of Don Bosco (SDB), Salesian Sisters (FMA), Salesian Cooperators and the Association of Mary Help of Christians (ADMA). Don Bosco Past Pupils, Catechist Sisters of Mary Immaculate Help of Christians (SMI), The Disciples (Don Bosco Secular Institute) were the later addition to the family present in the province of Panjim of the total 30 members.