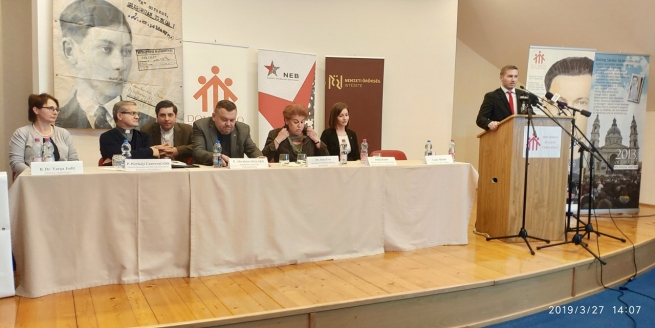 (ANS - Budapest) - "This year the whole Salesian Family in the world is developing the theme of holiness. I think the finding of the relics of Blessed Stephen Sándor is a great gift for the Salesian Family and for the Hungarian Church and society." With these words, the Postulator General for the Causes of Saints of the Salesian Family, Fr Pierluigi Cameroni, commented on the finding of the relics of Salesian Blessed Stephen Sándor, during a press conference held at the Provincial House of the Hungarian Salesians, held yesterday, Wednesday March 27, in Budapest.

During a crowded press conference, which was also attended by the Provincial of the Salesians in Hungary, Fr Abrahám Béla, and several scientific and forensic specialists involved in the work of finding and identifying the relics, Fr Cameroni began by recalling that Pope Francis declared Stephen Sándor a martyr exactly six years earlier, on March 27, 2013. "There is therefore this happy correspondence between his martyrdom and the finding of his relics," he noted.

He then explained how the recent discovery "is not in itself a novelty in the history of the Church: in ancient times the relics of the martyrs were found, even after decades and centuries. We are inside a story that continues.”

After thanking the Hungarian Salesian Province and all the authorities - civil, medical, scientific, "who accompanied this process with great care and professionalism", the Postulator General invited public authorities and the Nation Center for Experts and Research to further support the search for relics.

"On this basis, we - as a Congregation and with the Holy See - can proceed from the canonical-juridical-ecclesial point of view," continued Fr Cameroni, who subsequently illustrated the entire procedural process to which the relics will now be subjected.

In this sense, he also announced that there are already requests to receive small portions of the relics of Blessed Sándor in different parts of the world, and that soon a special reliquary will have to be made to allow the public veneration of the relics.