India – Fr Á.F. Artime to the Salesian Family: "Our mission is to bear witness" 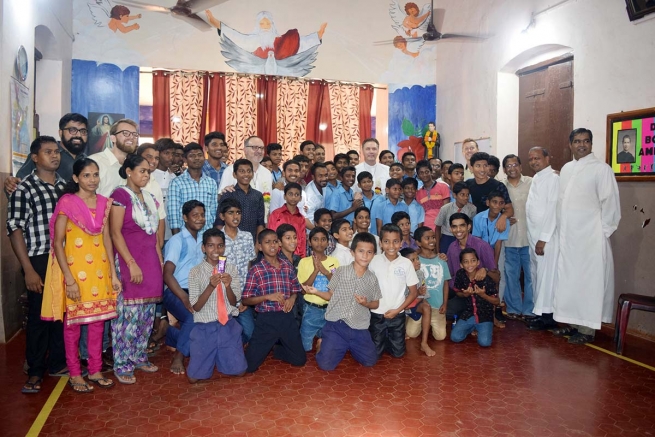 (ANS - Panjim) - "Do you have a warm heart? ... Be generous, there are many young people who do not have your structures and opportunities. Go forth to meet them!" These are some of the words that the Rector Major, Fr Ángel Fernández Artime, addressed to the young people of the Salesian Youth Movement, Sunday 31 March, at the Salesian Institute "Don Bosco" in Panjim.

"You must spread Salesian joy to others ... Do not be sad, Christians with a suffering face," added the Successor of Don Bosco before the young. Throughout the meeting, the Rector Major showed great affability, a paternal trait and a willingness to answer questions and requests from the young participants.

During the morning, Fr Á.F. Artime met the young Salesians in initial formation and the prenovices; in the afternoon, at the Provincial House of Oxdel, he gathered with members of the Salesian Family for a new moment of sharing in the Salesian spirit.

"We all have only one father, Don Bosco, and his charism is our mission," he said, recalling that the Salesian Family is like a big tree with, so far, 32 branches.

He then used an example from the Saint of Youth and Pope Francis to remind participants of two fundamental aspects. The first is that the Salesian Family works together with whoever is available: "Don Bosco called everyone to work with poor young people, including his mother, Mamma Margherita, also the mother of Father Rua, also the mother of Giovanni Cagliero ..."

The second, to put onself at the service of everyone: "What does the Church expect from you? Pope Francis said that the Church does not condemn other religions, the doors of the Church are always open to everyone. We are not here to protect ourselves from anyone. Our mission is to bear witness and the Gospel should accompany everything we do." Furthermore, he recalled the specific mission of groups composed essentially of lay people: "You are apostles in the world, scattered like a forest. You must flourish and bear fruit wherever you are planted!"

Yesterday morning, April 1st, the Rector Major celebrated the Eucharist on the tomb of St. Francis Xavier, patron of missions, and visited the ancient part of Goa. "I thank God for Saint Francis Xavier. I thank God for the many Salesian missionaries who work in difficult conditions. They bore witness and still bear witness today to the real life of Christians," he declared during Mass.

As the last act of his visit, as if to seal the days of the Animation Visit to the “San José Vaz” Province of India-Panjim (INP), he met with the young people at risk and in street conditions welcomed at the center of Ucassaim-Paliem. There he was able to admire the simplicity of the work and life of the Salesian community, and he was welcomed with great joy by the beneficiaries of the house, who had just taken the final exams of the year and still had their uniforms on.

And, as Don Bosco would have said, the Rector Major told them: "In your midst, I am very happy."