RMG – Somewhere between Plato and the “Mappa Mundi”. Salesian Map 2019 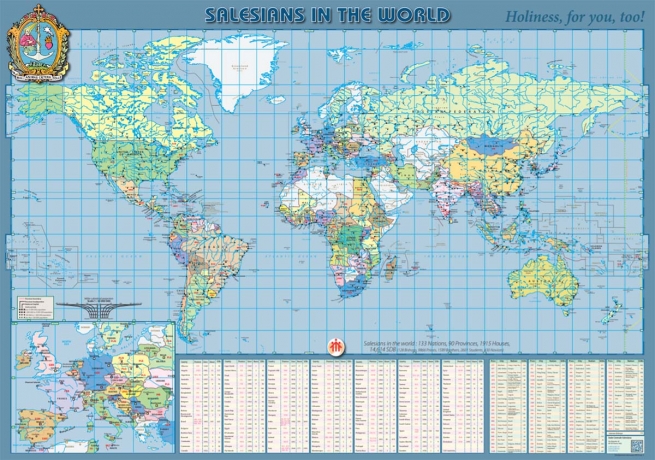 (ANS – Rome) – “We know how much Don Bosco loved maps of the world. He would pore over them and refer to them, especially at a time when his horizons had gone well beyond Piedmont, and what was coming together as 'Italy' in the second half of the 19th century, to the wider world of souls to be saved, young, old, indifferent, and especially souls as yet unenlightened by faith in Jesus”.

Such is the Salesian tradition in which, over a good many years now, the patient work of producing a “Salesians in the World” map has continued, offering us, via the website www.bosco.link, a map of the Salesian world in two versions:

It was Plato, who in one of his “Dialogues”, described the sphere of the world as something that a soul, ascending in a moment of supreme transcendence, might behold as fashioned “of colours more numerous and beautiful than any we have ever seen”. Then we have the famous Mappa Mundi (the largest of which, dating back to some time in the 1300s, is preserved at Hereford Cathedral in England). Measuring 1.59 x 1.34 metres, the map is constructed on a single sheet of vellum (calf skin).

Clearly within a Christian context, Jerusalem is at the centre, East is at the top. East, where the sun rises, was where medieval Christians looked for the second coming of Christ - when all geography would cease to be relevant! So, the Salesians in the World map fits somewhere between these two notions, borrowing something of the beauty of the former and the saving significance of the latter -- 'Holiness for you too' is featured prominently as a reminder at the top.

The Salesians in the World map is a Miller projection map, regarded these days as a successful compromise avoiding the extremes of the Mercator projection (though, interestingly enough, these showed up largely in the Arctic and Antarctic, neither of which appear in our map for obvious reasons!). It contains a wealth of information, a kind of mini 'Annuario' or Yearbook (it is based on Vol. 2 of the 2109 edition of the latter), enabling one to find a quick statistical summary of nations, provinces, houses, Salesians in their various categories, presented in at least two ways, one of which indicates the city where the provincial house or centre is located. There is even the ubiquitous QR code.

Download your own personal copy today! For further information on availability, contact the bosco.link webmaster via This email address is being protected from spambots. You need JavaScript enabled to view it..