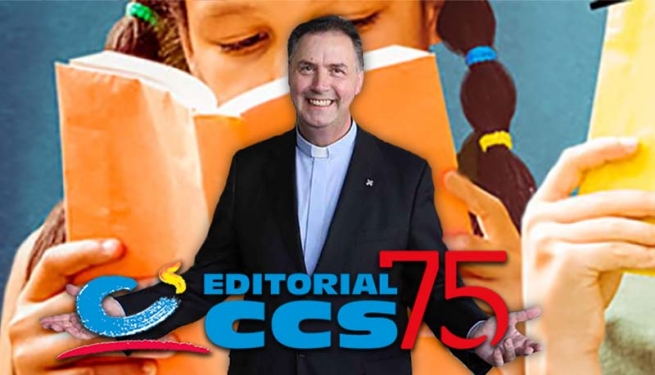 (ANS - Madrid) - The "CCS" publishing house (Central Catequística Salesiana) is celebrating its 75th anniversary. To mark the anniversary, a celebratory event is scheduled for tomorrow, Saturday 6 April, in Madrid. The event will be chaired by the Rector Major, Fr Ángel Fernández Artime.

It was January 31, 1944, the feast of St. John Bosco, when the publishing house SEI was first established - Sociedad Editora Ibérica being its first name. The idea came from the then Rector Major, Fr Pietro Ricaldone, who had entrusted it to the Salesians Fr Miguel Riera and Fr Romulo Piñol. With the support of the Salesian bishop Marcelino Olaechea, the Council of SEI was established, placed under the presidency of Ángel García de Vinuesa, a past pupil of the Salesians of Utrera.

Throughout these 75 years, the CCS has specialized in the publication of pastoral and catechetical books, education, social action and all things Salesian. Based in Madrid, it boasts an editorial catalogue of almost 4,000 titles. It also publishes several magazines, such as the National Salesian Bulletin, Misión Joven, Catequistas and Cuadernos de Formación, with a circulation of around 620,000 copies per year.

Hundreds of authors have chosen this publisher to publish their works. Since its inception, the CCS has also promoted the distribution of its books outside Spain, with special attention to Latin America.

Currently, the CCS publisher, in addition to publishing books, organizes activities aimed at educators and pastoral workers, events such as days of formation and meetings between authors and readers. It also produces various religious items, all this for a single purpose: to continue to be at the service of education and faith.

To celebrate 75 years of service, the publishing house has prepared various activities over a period of several months. In October 2018, a drawing competition for children was launched, entitled "Imagina a Don Bosco hoy", while in October 2019 the theatrical performance for children "El estanque de las Estrellas" is set to be staged.

Another initiative is the renewal of the website - www.editorialccs.com – "of a functional and intuitive design."

Other events that have already taken place: the book presentation of San Francisco de Sales, profeta y doctor del amor by Fr Eugenio Alburquerque, SDB; and the conference of Fr Rossano Sala, SDB, Special Secretary for the Synod of Bishops on Youth.

At the height of all the anniversary activities is, as said, the institutional meeting of tomorrow, 6 April, presided over by the Rector Major.