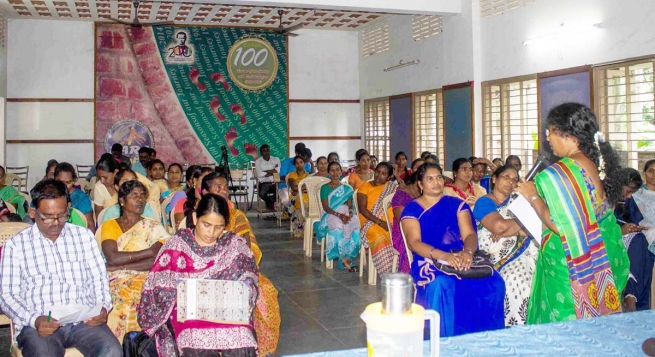 (ANS - Ravulapalem) - March 23 was a "Day of the Days" for the activists of the Salesian NGO "PARA" (People's Action for Rural Awakening), because it served to celebrate – at one single time - several “international days” taking place in March. In Ravulapalem, in the State of Andhra Pradesh, in India, a special conference was therefore organized for local leaders for the occasion.

PARA sees every day as an opportunity to promote the dignity of all human beings and gender equality. March 4, World Day of the fight against Sexual Exploitation, was an important opportunity to raise awareness of the NGO's activities; as was March 10, the anniversary of the birth of Savitri Bhai Phule (1831-1897), who started the first girls' school in India (1848) and was a social reformer committed against caste and gender discrimination.

On March 8th, it was obviously International Women's Day; while on March 24th the International Day for the Right to Truth on Human Rights Violations and for the dignity of Victims was celebrated; March 25 is International Day of Remembrance for the Slavery and Transatlantic Slaves of Slaves, renewed today for the many women and girls still treated as slaves.

For all these reasons, a round table was held in Ravulapalem on March 23rd with the participation of women leaders from the surrounding villages and the "Mandala" committees to combat discrimination, together with some men active in awareness-raising activities and social promotion of women.

Through the interventions of various speakers, who interpreted the themes of the different days, the guiding theme of the round table - #Balanceforbetter - was discussed, concerning the path to be taken towards authentic gender equality.

Among the numerous speeches there were those who recalled the precious role of Human Rights Clubs in educating girls to assert their rights; there were those cited the example of the new saint Óscar Arnulfo Romero for the battle of justice; and those who presented different, touching testimonies on the condition of slavery experienced by so many domestic workers in the Gulf countries.

The meeting concluded with the commitment of the participants to support the campaign to make their villages in places with a "zero" incidence of domestic violence and sexual exploitation.