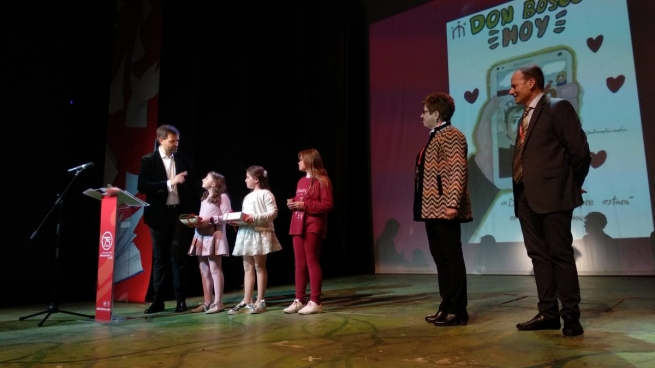 (ANS - Madrid) - To celebrate the 75 years of its existence, the publishing house "Editorial Catequística Salesiana" (CCS) organized a commemorative event on Saturday 6 April at the school theater "San Miguel Arcángel-Salesianos Paseo de Extremadura", in Madrid. It was attended by Fr Ángel Fernández Artime, Rector Major, the archbishop of Madrid, card. Carlos Osoro Serra, the two Provincials of Salesian Spain, Fr Juan Carlos Godoy Pérez and Fr Ángel Asurmendi Martínez, the Provincial of Portugal, Fr José Aníbal Mendonça, and many members of the Salesian Family from around the world.

The celebration featured several speeches through which the history of the CCS was recalled, that the publishing house was born by the will of the then Rector Major Fr Pietro Ricaldone, IV Successor of Don Bosco, who wanted, like Don Bosco, the "publication of good books". He wanted the books published by CCS not only to be texts lasting over time, but above all to contribute to education and faith. It was under his impulse that in 1944 the SEI (Sociedad Editora Ibérica) was born, which in 1994 took the name of Editorial CCS.

Besides the commemoration of the past and the progress made, there was also recognition paid to those who have shown depth and intellectual rigor, leaving traces of their thought in the work of the CCS, whether they were Salesians or lay people.

Furthermore, as a prelude to the celebration of this anniversary, the organizers had launched a drawing competition for all the students of the Salesian schools in Spain, entitled "Imagina a Don Bosco hoy". Launched to make Don Bosco's presence in today's world even more alive, for the organizers it was "a sign of the appreciation that the figure of Don Bosco continues to have, as it had a great response, with almost 4,000 participants."  Of note, one of the winners of the competition was Bianca Scurtu, a student of the Salesians of Zaragoza.

The presence of the Rector Major at the Madrid appointment was of great importance. In his speech he recalled Don Bosco as a great communicator and great writer of books for his young people. At the same time, he thanked all the Salesians and lay people who have worked and continue to work at the CCS, and in a special way to José Luis Mena, a professional photographer, creator of significant projects and a Salesian who produced beautiful photographs of the last four Rectors Major.

Having completed its first 75 years, the CCS continues to be valid and current not only in Spain but in the world, through an editorial production at the service of education and faith.